WASHINGTON, April 13 (Yonhap) -- The U.S. dropping of its largest non-nuclear bomb in Afghanistan will certainly send a message to North Korea that the communist nation could face the same fate if it forges ahead with a nuclear test, a U.S. expert said Thursday.

The U.S. military announced that it used the GBU-43B Massive Ordnance Air Blast (MOAB) bomb to strike an Islamic State (IS) tunnel complex. It was the first time that the 21,000-pound bomb, also known as the "Mother Of All Bombs," has been used in battle.

The bombing came as tensions run high on the Korean Peninsula amid fears that the communist North could go ahead with its sixth nuclear test this weekend to mark the birthday of the North's late founder and grandfather of leader Kim Jong-un.

"They haven't used this weapon before. They used it on underground tunnels in Afghanistan," Gordon Chang, an East Asia security expert, said on CNN, adding that a target of the bomb could include North Korean tunnels "where a large part of the North Korean military has hidden itself."

The expert also said that the U.S. could have timed the use of the bomb to "unnerve Kim Jong-un."

"This is before Saturday where it's the 105 anniversary of Kim Il-sung's birth, his grandfather, he's going to maybe demonstrate his power with the detonation of the country's sixth device. That is going to unnerve us. I think Trump is trying to unnerve him first," he said.

"Everybody knows exactly what happened and what I do is I authorize my military. We have the greatest military in the world and they've done their job as usual. So, we have given them total authorization," Trump said during a meeting with first responders.

Asked if the first use of the massive bomb is designed to send a message to North Korea, Trump only said, "I don't know if this sends a message. It doesn't make any difference if it does or not. North Korea is a problem. The problem will be taken care of." 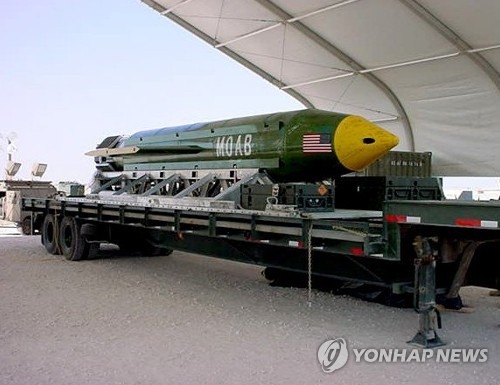