CHICAGO, April 13 (Yonhap) -- Ryu Hyun-jin of the Los Angeles Dodgers has suffered his second loss of the season in as many starts, unable to get past the Chicago Cubs.

Ryu was touched for a pair of home runs while allowing four earned runs in 4 2/3 innings at Wrigley Field in Chicago on Thursday (local time), as the Cubs went on to win 4-0.

Ryu couldn't get out of the fifth inning for the second straight start. Last week, Ryu also lasted 4 2/3 innings in a loss to the Colorado Rockies.

Ryu, returning from shoulder and elbow surgeries that limited him to one start over the past two years, made 77 pitches, 50 of them strikes.

The Cubs wasted little time getting to Ryu. With two outs in the bottom first, Anthony Rizzo swung on a high, 89-mph fastball and lined it over the right-center field wall for a solo home run. 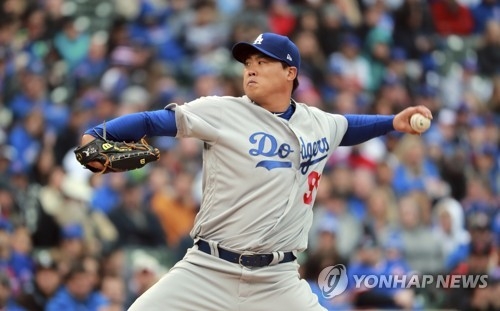 Ryu found himself in a jam with one out in the second, as the Cubs had men at the corners, before getting a line out and a pop out to prevent any damage.

After a clean third inning, Ryu gave up a leadoff home run to Addison Russell to start the fourth inning. Ryu left a 2-0 fastball over the heart of the plate, and Russell hammered it out of Wrigley over the left field wall.

Ryu gave up a single and hit a batter to open the fifth, and Kyle Schwarber's infield single -- a sharply hit grounder down the line that deflected off the glove of first baseman Scott Van Slyke -- made it 3-0 Cubs.

Then with the men at the corners, Rizzo got his second RBI off Ryu with a single to right.

The hit chased Ryu from the game, and Josh Fields got Russell to fly out to left to douse the fire.

The Dodgers managed only three hits against the Cubs starter Brett Anderson and were shut out for the second time this season.