JEJU, April 14 (Yonhap) -- The southern island of Jeju is regaining its former popularity as a destination for school trips, helping its business recovery from the plummet in the number of Chinese tourists, local officials said Friday.

The Jeju Special Self-Governing Provincial Tourism Association said some 129,600 students from 525 schools nationwide are expected to visit Jeju in the March-June period.

The scenic island is traditionally popular for honeymoon trips and has been drawing tourists from China in large numbers. Chinese investors are also big clients in Jeju's property market.

South Korea's decision to host a U.S. anti-missile defense system, however, had afflicted the China-led boom, with Beijing forbidding group tour packages to South Korea. The island's tourism business was further hurt by the tragic sinking of the Sewol ferry in April 2014 that killed more than 300 people. Most of the victims were high school students who were on a school trip to Jeju.

The association said it expects this year's number of student visitors to meet the 2015 level.

The tour bus business was already showing signs of recovery, association officials said, with 60 to 70 percent of the buses now in operation. The reservation rate is up more than 20 percent compared to same period last year, they said.

"We have been participating at city and provincial school workshops across the country to promote Jeju and induce school trips," an official said. "We expect the student trips to increase more in the second half of the year." 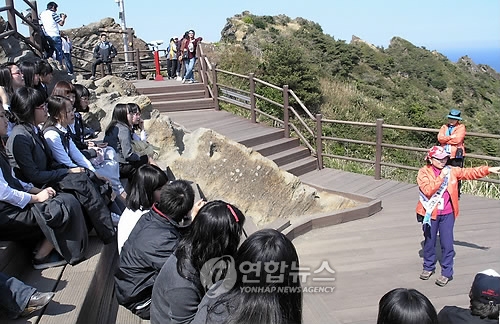