The South Korea tourism and hospitality sectors have been hit by the dearth in Chinese travelers triggered by the apparent retaliation by Beijing against the planned deployment of a U.S. anti-missile system, or the Terminal High Altitude Area Defense (THAAD), on the Korean Peninsula.

Since March 15, Beijing has banned the selling of Korea-bound travel packages, which is hurting the local tourism sector. As of April 9, the number of Chinese visitors has tumbled 63.6 percent from the previous year, according to the Korea Tourism Organization (KTO).

In the cited period, the number of Japanese tourists rose 18.5 percent, with the figure of Southeast Asians jumping 11.6 percent.

To stave off the damage, the KTO and related industries have joined forces to devise unique tour services targeting non-Chinese travelers.

The KTO and the provincial government of Gangwon Province hosted a weeklong spring fest tailored to Thai visitors this week, during which some 500 tourists ironically enjoyed sleigh-riding at a famous ski resort in PyeongChang.

The spring sleigh program came around the biggest holiday season in Thailand, known as Songkran. The event was a success, according to the KTO, as it was a rare experience for those from the region that barely has snowfall.

The state tourism body is also working to develop somewhat out-of-the-ordinary tours for young Japanese women in their 20s and 30s that take up a large portion of inbound visitors from the neighboring country.

Given the tendency that many of them are fond of luxury itineraries like getting spa treatment, the KTO is planning to induce them to come for city glamping -- a type of resort-style camping with amenities and services -- and Korean-herbal skincare treatment at hotels, it said.

Besides such plans, the KTO has been organizing the World Club Dome Korea, a global electronic dance music festival, slated for Sept. 22-24 in Incheon, hoping to draw at least 20,000 tourists from around the world, according to the tourism body. 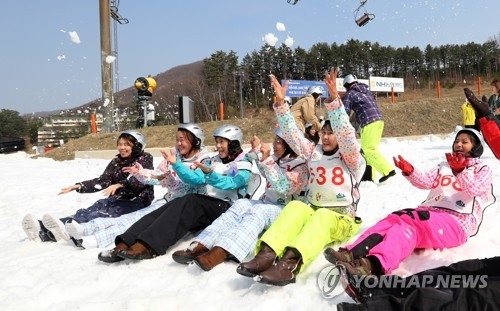