(ATTN: UPDATES with pledge to create ministry for small businesses in paras 9-10)

SEOUL, April 14 (Yonhap) -- Conservative presidential candidate Yoo Seong-min plans to focus on expanding welfare to tackle the troubles of the low birthrate and the aging population if elected in the upcoming vote, a list of his top 10 campaign pledges showed Friday.

The nominee of the splinter conservative Bareun Party made the pledge as part of his vision to build a nation where people want to have children and receive fair treatment for their labor.

The list obtained from the national election watchdog showed that the four-term lawmaker's top three pledges center on reforms for labor, women and welfare. 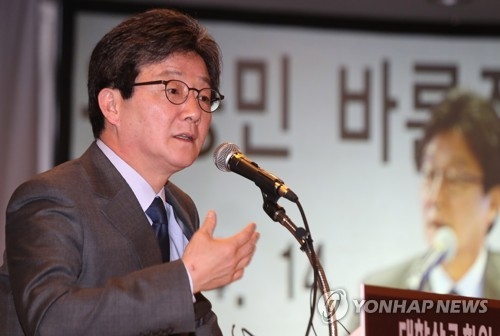 He promised to enact a law under which mothers can take maternity leave for up to three years and employees can leave work on time. He also pledged to double child care allowances, build more public child care centers, reduce the number of irregular workers, and raise the minimum wage.

Other welfare plans included scrapping a regulation that denies state subsidies to those who live below the poverty line but have income-earning family members to depend on.

Yoo is famous for accusing former President Park Geun-hye of backtracking on her welfare pledges after she took office in 2013. While Park branded him a traitor, many others regarded him highly for speaking his mind to his former boss. Yoo previously served as Park's chief aide.

In other areas, the former economist pledged to create an environment in which young people are encouraged to launch their own businesses and thus create more jobs.

He said he would introduce legislation to sever abusive ties between large and small businesses and overhaul practices that privilege family-controlled conglomerates known as chaebol.

Speaking to a group of businessmen later in the day, the candidate promised to upgrade the Small and Medium Business Administration to a new ministry handling startups, as well as small and medium-sized firms.

"We cannot implement policies for small and medium-sized businesses with just the SMBA, which belongs to the trade ministry whose policies revolve around large businesses," he said. "I will create (the new ministry) that will be tasked with properly pursuing policies for small and medium-sized firms and startups, and if I become president, I will meet frequently with representatives of smaller enterprises rather than leaders of large corporations."

Other pledges involved reforms in education and politics, including holding a referendum next year on a constitutional revision centered on changing the single five-year presidential term to a renewable four-year term.

Yoo's approval rating has remained in the single digits ahead of the May 9 election.