SEOUL, April 14 (Yonhap) -- The government said Friday it will release 6,700 tons of its fisheries stock starting next week to keep prices under control during the fishing prohibition period.

The prohibition period began April 1 and will continue to Aug. 11, depending on different types of net fishing. Violators are subject to legal punishment.

The Ministry of Oceans and Fisheries said the government will put its fish stock on the market from April 17 to May 26, including 4,500 tons of Alaska pollacks, 1,314 tons of mackerels and 171 tons of squid. The stock will first be supplied to traditional markets, and the rest to cooperatives and giant retail chains.

Products will be labeled as coming from a government warehouse and priced 10 to 40 percent cheaper than average, ministry officials said.

The ministry will keep monitoring the market to make sure that the government measure does not lead to unexpected price falls from excess supply. 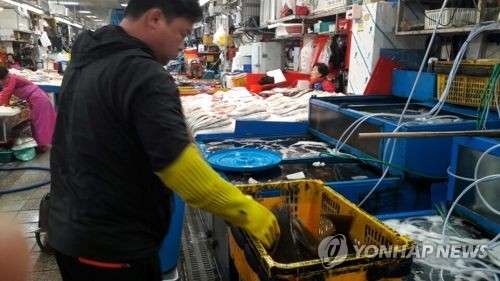