SEOUL, April 14 (Yonhap) -- Presidential front-runner Moon Jae-in stayed ahead of his biggest rival by 3 percentage points after both saw their approval ratings increase by the same margin, a poll showed Friday.

Moon of the liberal Democratic Party garnered 40 percent from Tuesday to Thursday, up 2 points from last week, according to Gallup Korea. Ahn Cheol-soo of the center-left People's Party also gained 2 points to 37 percent.

The May 9 election has shaped up to be a duel between the longtime rivals, with Ahn posing a growing challenge to Moon since early this month. 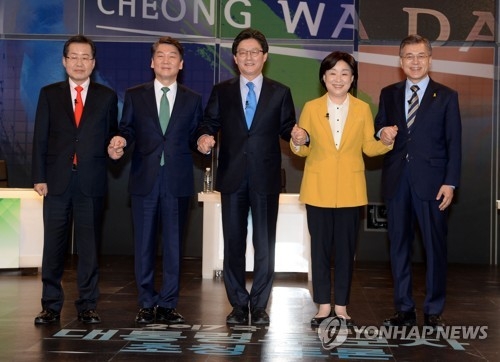 "Unlike other candidates, Ahn Cheol-soo's approval rating far exceeds the approval rating of his party," the pollster said. "In other words, at this point, Ahn has a considerable following outside the support base of the People's Party, which means there is a greater level of uncertainty or vulnerability compared with other candidates."

Hong Joon-pyo of the conservative Liberty Korea Party stood in third place with 7 percent, trailed by Sim Sang-jeung of the minor progressive Justice Party and Yoo Seong-min of the splinter conservative Bareun Party at 3 percent each.

The survey was conducted on 1,010 adults nationwide and had a margin of error of 3.1 percentage points at the 95 percent confidence level.