MOKPO, South Korea, April 14 (Yonhap) -- Finding the remains of the nine missing people in the Sewol ferry sinking is the top priority of the government-led team tasked with determining the cause and helping to heal the pain caused by the tragedy, official sources said Friday.

The Sewol has been safety placed in dry dock in Mokpo a few days before the third anniversary of its sinking, with workers taking steps to clean and disinfect the ill-fated vessel before the full-scale search begins.

The ferry capsized in waters near Jindo Island, some 472 kilometers southwest of Seoul, on April 16, 2014, claiming the lives of 304 people, most of whom were high school students on a school trip. Nine are still unaccounted for, and presumed to be inside the wreck.

In order to recover the remains and conduct a detailed investigation into the disaster, the South Korean government decided to pull the ferry from the water intact in 2015, with the 85.1 billion won (US$72 million) project going to a Chinese consortium led by state-run Shanghai Salvage.

After months of preparation, the operation to raise the Sewol, lying about 40 meters under water, began on March 22. After the ferry was raised, it was loaded onto a semisubmersible transport ship, and arrived in port on March 31. Even after its arrival in Mokpo it took more than 10 days to move the ship to a dry dock, due to its excessive weight.

The government said the search for the missing passengers, which is a key part of the national healing process, will be centered in compartments located towards the aft part of the vessel. Starting next week experts will carry out safety checks on the hull.

It had considered cutting the ship into two in order to gain easier access into the compartments, but scrapped the plan as bereaved families opposed it.

Instead, investigators will go into the Sewol ferry through windows and doors on the starboard side, which is exposed, and remove any dangerous debris and obstacles. All items retrieved from the ship including mud and cargo will be scrutinized to find any bone fragments of the missing people, it authorities said.

Since the project to raise the ship began last month, 20 animal bone fragments and some 100 items including a passport, bags and other personal belongings have been recovered from the wreck. The passport was found to be that of Lee Joon-seok, the Sewol's 70-year-old captain who is serving 36 years in prison for criminal negligence and dereliction of duty.

The government said it will also decide whether to preserve the ferry as an exhibit after investigations are completed. 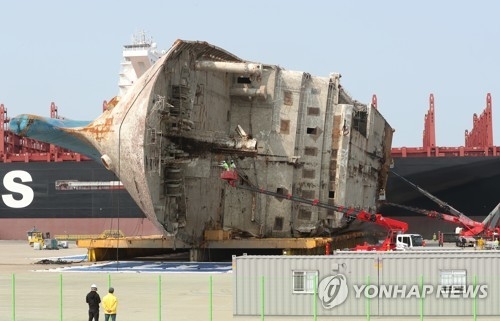