SEOUL, April 14 (Yonhap) -- Presidential front-runner Moon Jae-in on Friday announced child care policy pledges and vowed to build more state-run preschools, seeking to widen his lead over a liberal rival who has been hit by controversy for hinting at the opposite.

The presidential candidate of the liberal Democratic Party said he will expand the number of state-run kindergartens and preschools to have at least 40 percent of all children enrolled at such facilities by the end of his five-year presidency if elected.

Moon did not reveal what the current percentage was, only saying, "I will greatly expand the number of public day care centers." 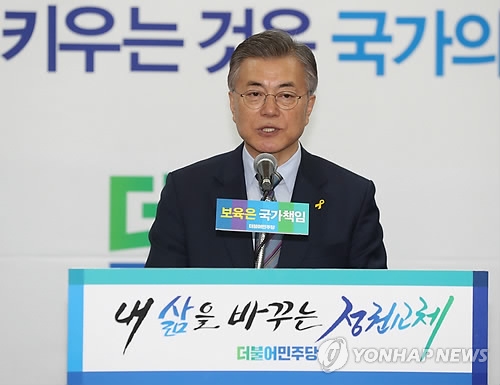 The liberal presidential candidate currently leads most polls ahead of the May 9 presidential election, but the upcoming election is increasingly becoming a two-way race between Moon and Ahn Cheol-soo from the center-left People's Party.

The two together garnered more than 80 percent of votes in most recent polls, while Hong Joon-pyo of the former ruling Liberty Korea Party remained in a distant third with less than 8 percent.

And with less than four weeks left until the election, Moon's latest campaign pledge could be seen as an attempt to outdistance the runner-up. Ahn faced strong criticism after saying he will reduce stand-alone public kindergartens at a gathering of owners and operators of private kindergartens and preschools.

The software mogul-turned-politician later explained he meant to underscore a need to increase the number of public kindergartens and preschools operated by higher schools, such as elementary schools or colleges.

Apparently aiming to win the hearts of young parents, who often call the high costs of private kindergartens and day care centers a serious burden, Moon said he will even work with private centers, turning those that are struggling into public facilities while improving others so that they provide similar services to public ones.

"Private kindergartens that are having difficulties will be taken over by the government or be developed into public kindergartens. The treatment of teachers (at private facilities) will also be improved to the level of those at public facilities," he told a press conference.

If elected, he said he will double the monthly allowance paid to parents on childcare leave by employers from the current 40 percent of their normal wage to 80 percent.

Also, parents will be given a monthly allowance of 100,000 won (US$87) for each child under the age of five, while they will also be allowed to reduce their daily working hours to six for up to 24 months without any reduction in salary, he said. 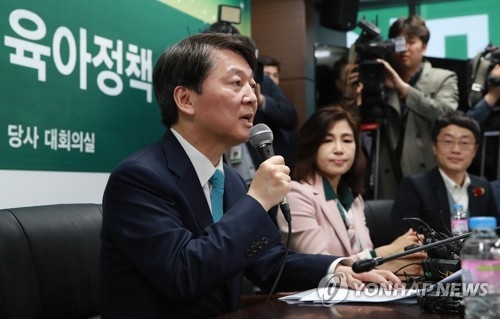 Ahn, struggling to make up for his recent misstep, held a special meeting with young school parents Friday to introduce his own set of election pledges regarding child care and public education.

He too said he will expand the proportion of young children enrolled in state-run kindergartens and preschools to 40 percent.

This will require creating 6,000 new classes for preschoolers, according to Ahn.

Also, he will increase the number of public day care centers to nearly double the proportion of children looked after by such facilities to 20 percent of the total from the current 11 percent.

The presidential candidate also promised a monthly allowance of 100,000 won for each child under the age of 11 years old at all households in the lower 80 percent of the income bracket.

"Raising a child is where the construction of a nation begins," Ahn told the meeting. "The next government will have to be responsible for the upbringing of young children, and the key point of such a responsibility will be for the government, businesses and society to together build a favorable environment for having and raising children."