SEOUL, April 14 (Yonhap) -- North Korea appears to seek to strengthen internal solidarity and give off an image of being unscathed by sanctions by opening a new high-rise residential area, South Korea's unification ministry said Friday.

North Korea on Thursday held the ceremony to mark the completion of the construction of Ryomyong Street lined with skyscrapers in Pyongyang as it is set to celebrate the 105th birthday of late state founder Kim Il-sung on Saturday.

"Externally, North Korea appears to show that it remains firm (despite an international sanctions regime). The country is likely to continue to stick to its dual policy of nuclear and economic development," Lee Eugene, a ministry vice spokesperson, told a regular press briefing.

North Korea has been pushing for the housing project in an apparent bid to show tough international sanctions do not work.

"The construction of Ryomyong Street was a grand battle to crush the sanctions (against North Korea)," Rodong Sinmun, the country's main newspaper, said Friday.

Pyongyang held the ceremony, attended by ruler Kim Jong-un, in front of about 200 foreign journalists who were invited to North Korea ahead of the key national holiday.

The move came amid heightened tensions that the North could conduct its sixth nuclear test or launch missiles around its major anniversaries in April. Concerns are also growing over Washington's possible pre-emptive strike against the North to counter its provocations.

"The government is gearing for full readiness as North Korea could make provocative acts at any time upon the leadership's decision," Lee added. 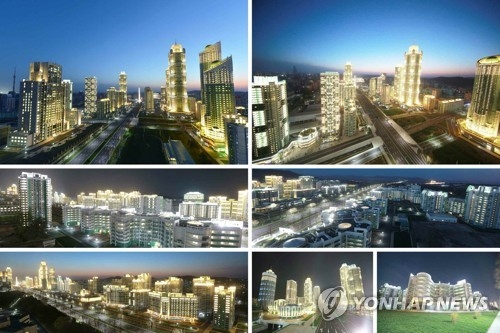