The Korea Football Association (KFA) said South Korea's U-20 team will face Uruguay on May 11 and take on Senegal three days later. The venues for two matches will be announced later, it added.

South Korea will host the FIFA U-20 World Cup from May 20 to June 11 in six cities. In the 24-team tournament, they are in Group A with England, Argentina and Guinea.

The KFA said the two friendlies will serve as a tune-up for South Korea's first two group stage matches. South Korea will open the tournament with Guinea at Jeonju World Cup Stadium in Jeonju, North Jeolla Province, on May 20 and go head-to-head against Argentina at the same venue three days later.

Both Uruguay and Senegal are also participants in the U-20 World Cup. Uruguay are in Group D with Japan, Italy and South Africa. Senegal are grouped with the United States, Ecuador and Saudi Arabia in Group F.

South Korea, led by head coach Shin Tae-yong, called up 25 players for April training and they have been training at the National Football Center in Paju, Gyeonggi Province, since Monday. The KFA said Shin will announce his 21-man final squad on April 29 or 30. The deadline for the final entry is May 8.

In March, South Korea won a FIFA U-20 World Cup test tournament at home that featured Honduras, Ecuador and Zambia. 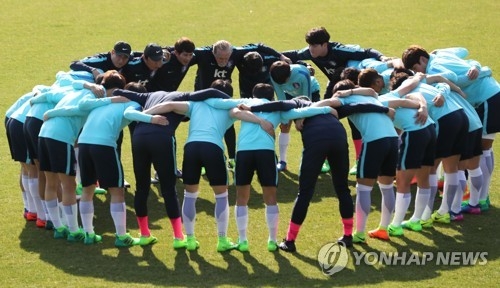 S. Korea to face Uruguay, Senegal in friendlies ahead of U-20 World Cup

S. Korea to face Uruguay, Senegal in friendlies ahead of U-20 World Cup