SEOUL, April 16 (Yonhap) -- South Korean cosmetics makers are heading for dim first-quarter earnings, caused by China's boycott of products made by local companies in the wake of a diplomatic standoff over the deployment of a U.S. missile defense system, analysts said Sunday.

Industry leader AmorePacific Corp. is forecast to have made 315.1 billion won (US$276.5 million) in operating profit for the January-March period, down 6.7 percent from a year earlier, according to a report by Samsung Securities Co. Its sales are estimated to have gained 2.7 percent on-year to 1.51 trillion won.

The first-quarter operating profit of LG Household & Health Care Co., the No. 2 player in the sector, likely advanced 6 percent to 247.5 billion won, with sales expected to have reached 1.6 trillion won, observers here said.

Their performance marks sluggish growth considering that both companies posted double-digit on-year increases in operating income and revenue for the past two years, except for the last quarter when "China risks" began to emerge amid an economic downturn.

Analysts cited the boycott by Beijing on Korean-made goods as a key factor that weighed on their earnings, which was sparked by a diplomatic row as Seoul moved to station a Terminal High Altitude Area Defense (THAAD) battery on its soil.

China has claimed that THAAD will hurt its security interests and has carried out an aggressive attack on Korean firms through business suspensions and stricter customs procedures.

AmorePacific's offshore unit is predicted to have expanded 16.5 percent on-year as of end-March, according to Samsung Securities, which will be the lowest quarterly growth since 2013.

"The recent anti-Korea sentiment in China has likely sapped its regional growth in the region," Park Eun-kyung, a Samsung analyst said. "In terms of duty-free sales, we expect zero growth for AmorePacific as China's ban of trip sales (to Korea) and hostile public sentiment should directly impact revenue."

In 2016, overseas sales accounted for about 35 percent of the top cosmetics maker's entire intake.

The sales of beauty items by LG Household, which mainly produces cosmetics and household items, has also likely grown at the slowest pace in a decade, dragged down by faltering duty-free and outbound sales, analysts said.

Adding to the woes, market watchers forecast Korean cosmetics firms to fare worse in the second quarter, given that the full impact of China's boycott will be felt then.

AmorePacific and LG Household are expected to experience an at least 20 percent on-year decline in duty-free sales for the April-June period, according to Samsung Securities. 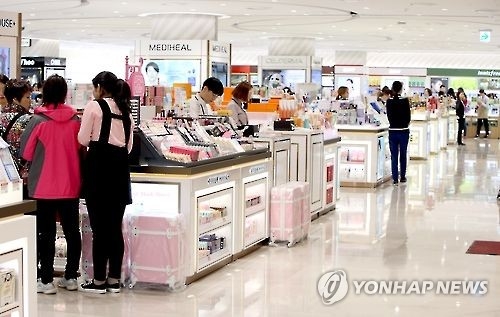