Episode four of the Wednesday-Thursday series "Queen of Mystery" recorded a 11.6 percent nationwide viewership Thursday night, according to Nielsen Korea. Its viewership rose 1.5 percentage points from the previous day.

The show seems to have benefited from the success of its predecessor "Good Manager" -- an office comedy series that ended in late March -- with an impressive 17.2 percent viewership last week.

MBC TV's competing show "Radiant Office" stood at 7.1 percent, while the regular broadcast of SBS TV's high-budget time-slip series "Saimdang" was replaced by the live debate among candidates for next month's presidential election.

"Queen of Mystery" stars Kwon Sang-woo as Ha Wan-seung, an elite hard-boiled narcotics detective, who is as thorough as they come. His opposite is Choi Kang-hee, cast as Yoo Seol-ok, an unassuming neighborhood "ajumma," who is a natural-born genius crime solver.

Despite having no authority in law enforcement, Seol-ok constantly snoops around crime scenes to investigate pending cases, clashing with investigations led by Wan-seung. Though reluctant at first, Wan-seung accepts her talent as a genius and joins forces with her. 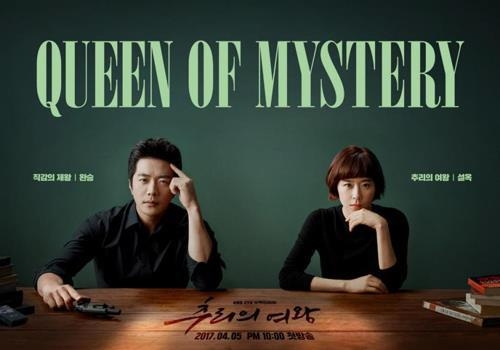