SEOUL, April 14 (Yonhap) -- North Korea is apparently preparing to stage a large-scale military parade as early as this weekend, officials here said Friday, amid rising tensions on the peninsula.

"There is intelligence that North Korea has controlled traffic in Pyongyang for a military parade," a South Korean government official said.

He said the move, if true, could be intended to transport various types of weapons and other equipment, stored at the Mirim airfield, to the downtown area of the capital.

There have been indications of the North's preparations for a parade ahead of key political events.

The communist nation is to celebrate the 105th anniversary of the birth of Kim Il-sung, its late founding leader and grandfather of current leader Kim Jong-un, on Saturday. North Koreans call the anniversary the Day of Sun.

It is also scheduled to commemorate the 85th anniversary of the founding of its army on April 25.

"We are keeping close tabs on the possibility of North Korea holding a military parade to mark such an upcoming anniversary," Army Col. Roh Jae-cheon, spokesman for the Joint Chiefs of Staff, told reporters.

The secretive North has not announced any schedule for a massive parade, which it uses to show off its military prowess and unveil what it claims to be newly developed missiles or other advanced weapons. 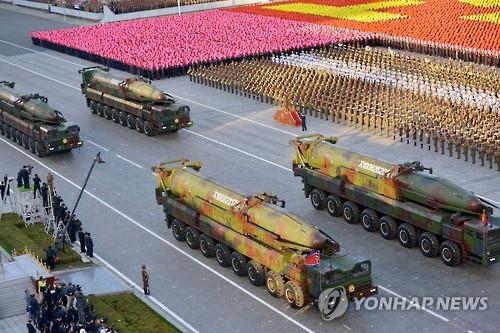 The North last held its military parade on Oct. 10, 2015, the 70th founding anniversary of the ruling Workers' Party of Korea.

It staged a similar event in 2012 to mark the centenary of Kim Il-sung's birth.

"It's the only time that North Korea staged a military parade on Kim Il-sung's birth anniversary," another South Korean defense official said. "I think it's more likely to hold such an event this time as a celebration related to the military."

However, the North may be tempted to demonstrate its firepower to the U.S. as early as possible, especially as the U.S. has deployed a host of strategic military assets near the Korean Peninsula.

A naval strike group, led by the USS Carl Vinson aircraft carrier, is sailing toward Korea.

"Whatever comes from the U.S., we will cope with it. We are fully prepared to handle it," North Korea's vice foreign minister Han Song-ryol was quoted as saying in an interview with the Associated Press in Pyongyang.

He accused the U.S. of having become "more viciously aggressive" under the Donald Trump administration.

He warned that the North stands ready to conduct a nuclear test anytime upon the leadership's decision.

Preparations for massive military parade under way in Pyongyang

Preparations for massive military parade under way in Pyongyang