The nominee of the center-left People's Party made the promise during a meeting with trade industry representatives, saying he believes in the importance of easing regulations while simultaneously strengthening the monitoring of firms.

"In the same way that sports matches need simplified rules and stricter refereeing, the same applies to a state," he said. "Startups need an industrial complex where they can be free from regulations and try out various things."

"The principal players are private citizens and firms, and the role of politics and the government should be limited to creating a base upon which they can freely demonstrate their abilities," he said.

The government should first upend the education system to nurture a creative workforce and invest in science to foster the development of indigenous technologies, he added.

Ahn is currently seen in a duel with Moon Jae-in of the liberal Democratic Party ahead of the May 9 presidential election. 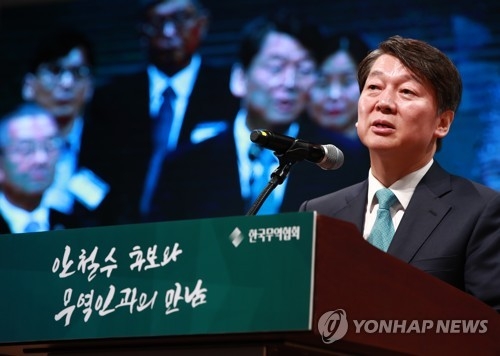