Fave Entertainment uploaded the short clip on its YouTube channel on Friday at noon. The video shows Kim and IU being close and intimate, including moments of the two stars embracing each other, in the TV drama-like footage.

"Ending Scene," a slow-tempo ballad heavy on strings, will be included on IU's fourth full-length album titled "Palette," which comes out on April 21.

Kim, star of hit South Korean drama "My Love From the Star", and IU together appeared in the 2011 KBS 2TV drama "Dream High" and also on "Producer" on the same network in 2015. The two are reportedly close friends, with Kim dropping in at IU's concerts on several occasions and IU appearing in Kim's upcoming movie "Real" as a cameo. 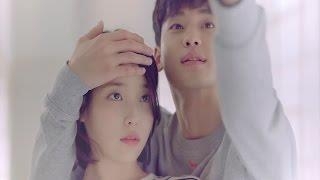