SEOUL, April 15 (Yonhap) -- The countdown to the first Winter Olympics to be held in South Korea reached 300 days on Saturday, with the east coast host city of PyeongChang ratcheting up its preparations and local athletes eyeing a record medal haul with a top-four finish.

The PyeongChang Winter Games will be held from Feb. 9 to 25 next year under the slogan "Passion. Connected." It will be the first Olympics in South Korea since the 1988 Seoul Summer Games.

A dozen venues in PyeongChang, located some 180 kilometers east of Seoul, and its sub-host cities of Gangneung and Jeongseon in Gangwon Province will stage seven sports across 15 disciplines.

The PyeongChang Organizing Committee for the 2018 Olympic & Paralympic Winter Games (POCOG) estimates that 95 countries will send about 6,500 athletes and officials to take part in its Olympics. They will vie for 102 gold medals at stake.

The 12 venues -- seven for sports on snow and five for events on ice -- are all located within 30 minutes of each other.

Jeongseon Alpine Centre is the lone venue in Jeongseon, about 20 kilometers south of PyeongChang. 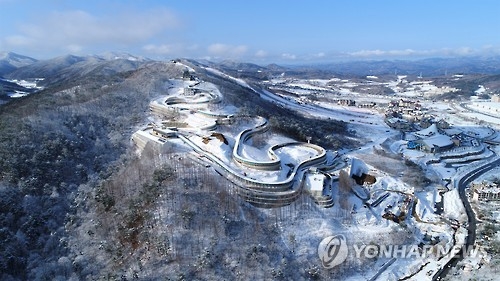 Six of the 12 venues are being constructed for the Olympics, while six existing venues will be refurbished for the quadrennial competition. The organizers said construction of four new facilities has been completed, while Alpensia Sliding Centre is 94.15 percent complete and Jeongseon Alpine Centre has 86.6 percent of construction work done so far.

All these venues staged Olympic test events earlier this year to find out their shortcomings and check their readiness ahead of the Winter Games. There were 15 test events in disciplines like figure skating, hockey, snowboarding, skeleton, biathlon, ski jumping and curling, among others.

The POCOG, led by Lee Hee-beom, had been suffering from the impact of a major political scandal surrounding former President Park Geun-hye and her confidante, Choi Soon-sil. It made local companies reluctant to open their wallets, but now efforts for securing sponsorship deals are back on track.

PyeongChang's goal is to bring in 940 billion won (US$825.5 million), and it has reached about 92 percent of the target, according to the organizers. Lee previously said he's trying to get public corporations more involved.

At the upcoming Winter Olympics, South Korea has set out to collect up to 20 medals, including eight gold, and finish in the top four in the medal race.

A whopping 21 of those 26 gold medals have come from short track speed skating, and the country should pick up a few more on home ice. South Korea recently finalized its Olympic short track squad for the PyeongChang Games.

Shim Suk-hee and Choi Min-jeong have dominated the women's competition over the past three years and will enter PyeongChang 2018 as favorites to grab multiple medals. Shim won three medals at her Olympic debut in 2014, while Choi is a two-time reigning world overall champion. They are joined by three other qualifiers -- Kim A-lang, Lee Yu-bin and Kim Ye-jin. 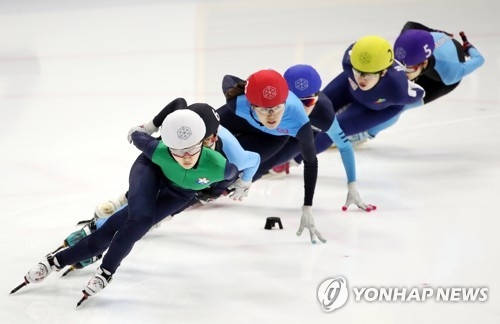 On the men's side, Seo Yi-ra, who won this year's world overall title, and Kwak Yoon-gy, the 2012 world overall champion and 2010 Olympic silver medalist, will lead the way with fresh faces Lim Hyo-jun, Hwang Dae-heon and Kim Do-kyoum.

In speed skating, Lee Sang-hwa will try to win her third straight gold medal in the women's 500m. Only Bonnie Blair of the United States has won three straight Olympic titles in the distance, though the last of Blair's titles, won at the 1994 Lillehammer Olympics, came two years after her second gold.

Lee Seung-hoon and Kim Bo-reum will seek to become inaugural Olympic speed skating champions in mass start, a 16-lap race with all skaters starting at once.

Yun Sung-bin in men's skeleton represents South Korea's best hope for the first Olympic medal in a sliding event. He has finished second overall in each of the past two International Bobsleigh and Skeleton Federation (IBSF) World Cup seasons. In eight World Cups this past season, Yun never finished worse than fifth

Won Yun-jong and Seo Young-woo, the two-man bobsleigh team that finished as the world No. 1 last season, have gone winless this season, but the tandem believes they can recover their old form with a home-field advantage. The sliders from host nations have thrived at recent Winter Games because they get to train on the Olympic track more often than their rivals and learn every twist and turn of the course. 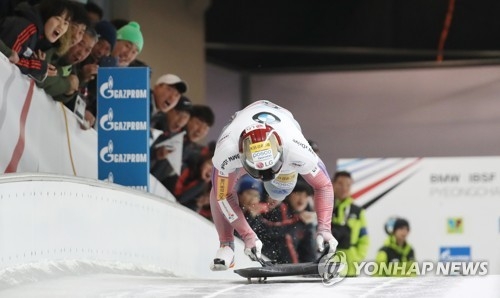