National security topped the list of 10 priority election pledges the nominee of the pro-government Liberty Korea Party submitted to the National Election Commission, according to the party.

To beef up defense against the North, he will consult with Washington to bring back the U.S. nuclear arsenal that was withdrawn from the peninsula in 1991, the party said.

The prosecutor-turned-politician vowed to complete the deployment of an advanced U.S. missile defense system here in the first half of this year and procure more reconnaissance and strike equipment as well as nuclear-powered submarines designed to fend off submarine-launched ballistic missiles from the North.

He also pledged to reorganize the military with the addition of a Marine Corps special warfare command and bolster cooperation with the international community to pressure Pyongyang to abandon its nuclear weapons program. 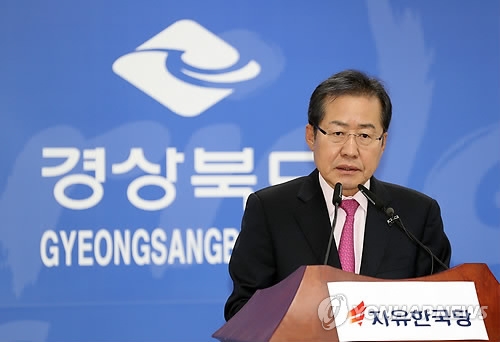 "An appeasement policy doesn't work with North Korea anymore," he wrote on his Facebook page later in the day. "Only through an 'armed peace' of superior power can we suppress North Korea."

The U.S. military's dropping of the largest non-nuclear bomb in Afghanistan Thursday serves as a strong warning against North Korea's nuclear provocations, he added.

The firebrand politician has sought to rally the conservative vote at a time when tensions are high over the possibility North Korea could conduct another nuclear test and the U.S. could respond with a pre-emptive strike on the communist country.

On the economy, Hong said he would create more jobs by drastically easing regulations and improve the business environment by reforming powerful and "ideologically biased" labor unions.

In other areas, he promised to expand welfare for average citizens, protect small businesses and invigorate provincial economies, eradicate corruption, improve the environment, nurture a future growth engine in the era of the fourth industrial revolution, and work to raise the low birth rate.

He even called for reviving the death penalty for heinous criminals.

Hong has ranked a distant third behind two liberal candidates in most opinion surveys conducted ahead of the May 9 election. His approval rating has hovered at below 10 percent. 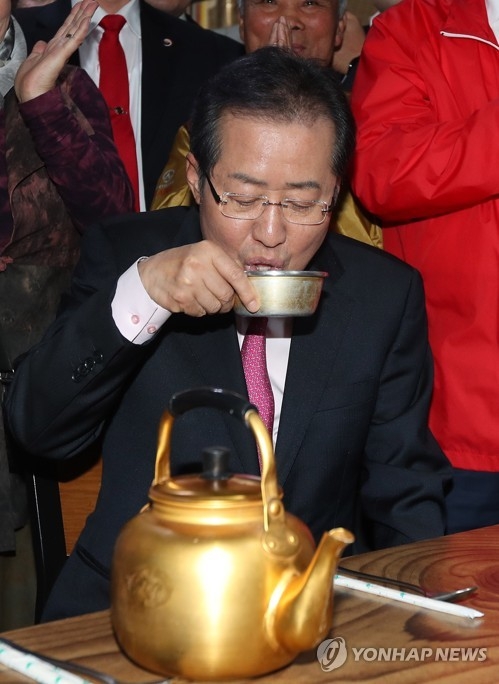