SEOUL, April 14 (Yonhap) -- Police said Friday they have arrested a 53-year-old woman affiliated with a cult group that worships dogs for allegedly beating to death a 3-year-old boy, who she said was possessed by a demon, in July 2014.

The Gangseo Police Station in Seoul also took the boy's 41-year-old mother, the group's leader, and his wife into custody for abandoning and later cremating his body.

Recommending an indictment, police have sent the investigation result to the prosecution.

According to police, the mother, identified only by her family name Choi, joined a commune of the cult group in February 2014 with her son and 6-year-old daughter after divorcing her husband who was against her involvement in the group.

The cult group, which has no official appellation, worships dogs of the Korean Jindo breed. Ten Jindo dogs were enshrined as spiritual beings at one of the group's four houses of a multiplex housing unit in Seoul's Gangseo Ward, while 10 followers of the cult were living together in the remaining three houses, police said.

People involved in the cult told investigators that the woman whose name was withheld had struck the boy multiple times for the reason that he was not disciplined.

On July 7, 2014, the senior member of the cult, who was responsible for keeping its discipline, beat him with a wooden rice paddle in front of his mother, saying she had to drive a demon, which caused him to wet the bed, out of him.

The mother did not join in on the beating even after being handed the paddle, as she was in a state of panic, police said.

After being beaten, the boy passed out and died. For fear of the crime being detected, the woman and Choi, along with the wife of the cult's leader whose name was withheld, placed the boy's body into a wooden box before burying it on a hill in the southwestern city of Jeonju, where the group had another compound.

Three days later, the three and the cult's leader went to the burial site and disinterred his body as they feared wild boars could dig it up. They cremated it on the spot before dispersing its ashes at a stream in the neighboring town of Imsil.

Choi left the cult with her daughter and the next month reported to police that her son had gone missing in Bucheon, west of Seoul.

But the murder case's full account surfaced earlier this year after one of the cult's followers who had left it testified about the alleged murder of the boy and his burial. 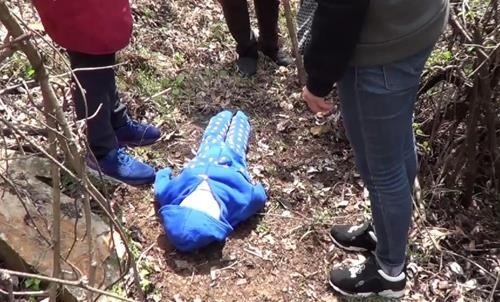 The four suspects acknowledged their involvement in the crime, with the boy's mother resenting the cult for the loss of her boy.

Police said the cult's people have called themselves a gathering of people who love Jindo dogs and there are no circumstances that show any assaults or maltreatment of other children or adults in the cult.