WANDO, South Korea, April 14 (Yonhap) -- An international seaweed expo opened on the South Korean island of Wando on Friday to shed new light on the maritime species' potential value not only as a healthy food but as a raw material for diverse future industries including medicine and energy.

The second Wando Seaweeds Expo will run for 24 days on the island off the country's southwest coast under the theme "Discovery of the Future Life, Seaweeds." The first event was held in 2014.

Organizers expect that the expo will serve not only as a venue for exhibiting diverse food applications of seaweed but also an opportunity to explore the possibility of developing it into a major industry with great growth potential.

"Seaweed, which used to be known only as food, has limitless potential as it is now being used as raw material for bioenergy, paper, medicines, cosmetics and other products," Shin Woo-chul, head of Wando County and the organizing committee, said prior to the opening.

The event is expected to bring together about 1,000 buyers from 150 countries, including the United States, China, Japan, Canada and Australia, according to the organizers. 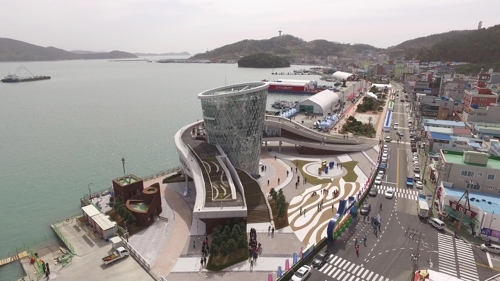 The organizers held a ceremony at 8:15 a.m. to mark the launch of the expo that included a performance by a military band, releasing balloons into the air to wish for its success, and the celebration of the first South Korean and foreign visitors.

Lee In-sook from Seoul, a 64-year-old pharmacist, and Yokuo Ota from Japan, owner of a seaweed processing firm, were greeted as the first visitors.

The expo has six event halls -- the Main Theme Hall, the Health Food Hall, the Industrial Resources Hall, the Ecology Environment Hall, the Aquatic Culture Hall and the Experience of Seaweeds Hall.

The expo's main exhibition hall, located at a seaside park, hosts participating companies showcasing new technologies, products, materials and services related to the seaweed industry. Three exhibition halls stand on large barges, the first of their kind in South Korea, according to organizers.

A water screen was installed to give visitors a glimpse into the history of seaweed and learn about various types such as kelp, sea mustard and laver. A virtual reality system enables visitors to experience an undersea forest of seaweed.

Various workshops and forums will also be held during the expo to discuss new technologies and the results of the latest research on seaweed farming and the management of the coastal ecosystem. A host of "experience" and other events are also in store for visitors.

The number of visitors is expected to reach 600,000, including 30,000 foreigners, as 500,000 advance tickets have already been sold, organizers said, adding the 10 billion-won (US$8.9 million) expo will likely generate 49.7 billion won in estimated revenue. 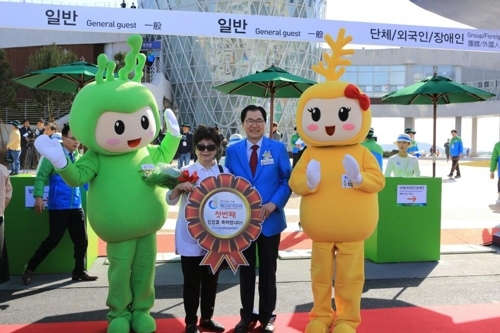