SEOUL, April 15 (Yonhap) -- North Korea staged a massive military parade on Saturday to mark the 105th birthday of late state founder Kim Il-sung amid growing tensions on the divided peninsula over its nuclear and missile program.

North Korean leader Kim Jong-un presided over the parade at the square named after the founder in Pyongyang with soldiers marching in formation, according to live footage aired by the country's state TV broadcaster.

"The most powerful and cutting-edge striking and defense means in our own style lined up to put an end to military supremacy claimed by imperialists," it reported.

On Thursday, it opened a new residential zone lined with skyscrapers, called Ryomyong Street, in a bid to show the world that it remains unscathed by international sanctions. 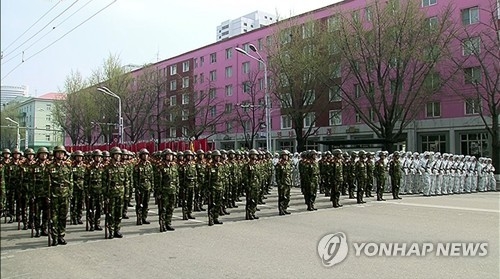