SEOUL, April 15 (Yonhap) -- North Korea staged a massive military parade on Saturday to mark the 105th birthday of late state founder Kim Il-sung in a show of military prowess amid tensions over its nuclear and missile programs.

Flanked by senior party and military officials, North Korean leader Kim Jong-un inspected the parade at a Pyongyang square named after his grandfather, according to live footage aired by the state TV broadcaster.

Wearing a black suit, Kim returned a salute by goose-stepping soldiers marching through the square, showed the TV footage. 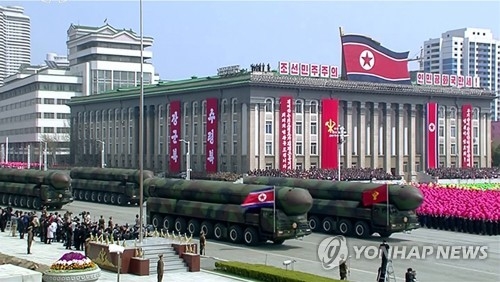 North Korea is seen as trying to flex its military muscle through the parade as it seeks to show the international community that it remains unscathed by tough international sanctions.

A stream of tanks and armored vehicles carrying what looked like ballistic missiles rolled through the square, showed the TV footage.

North Korea unveiled what appears to be a new intercontinental ballistic missile (ICBM) at the parade, Seoul's military said. Also on display were prototypes of submarine-launched missiles and IRBMs. 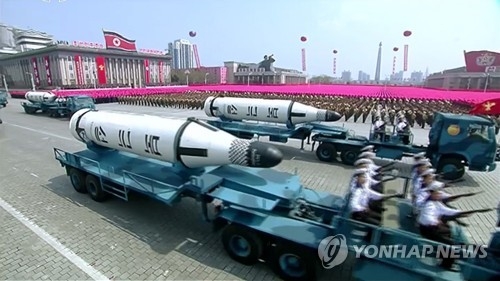 Pyongyang will mark the 85th anniversary of the military's founding on April 25 with the possibility of nuclear and missile provocations left open.

Since inheriting power from his father Kim Jong-il in late 2011, Kim Jong-un has strengthened his power through a reign of terror. He assumed two new titles within the top party and state posts last year, reaffirming his one-man leadership.

A gaunt-looking Kim appeared wearing the badge of a general on his suit in an indication that he might have been reinstated. Kim's military rank was demoted to major general due to the dismissal. 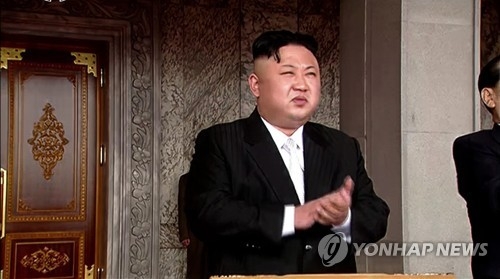