The event was accompanied by an on-stage interview in which the members answered questions on several subjects, including member Nada who recently split from the band after some legal issues with its label Mafia Records.

During the interview, some of the members burst into tears as they got emotional.

Nada, an original member of Wassup who gained public attention following her appearance on TV rap show "Unpretty Rapstar 3" last year, was officially dropped from the band in February alongside members Jinju and Dain. The three had filed lawsuits to call off their contracts with Mafia for complex reasons, including unfair payment.

The album was released on Thursday. 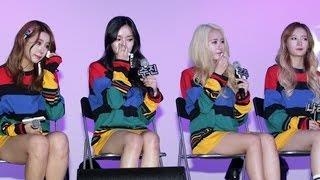