WASHINGTON, April 14 (Yonhap) -- The United States has been assessing some military options on North Korea, and they will be a topic when Vice President Mike Pence visits South Korea next week, a senior administration official said.

The official, who spoke on condition of anonymity during a background briefing to preview Pence's trip, declined to elaborate on what military options are being assessed, including if they are defensive measures or include a preemptive strike.

But the remark underscores the seriousness with which the U.S. sees the situation on the Korean Peninsula amid heightened concern that the communist nation could conduct what would be its sixth nuclear test at any time.

Tensions spiked further as the U.S. has redirected an aircraft carrier strike group led by USS Carl Vinson to waters off the Korean Peninsula in a massive show of force designed to warn Pyongyang not to undertake any provocations.

"We've got some military options already being assessed, but we'll work that as we sit down in discussions with General Brooks, the commander there on peninsula," the official said, referring to Gen. Vincent Brooks, commander of some 28,500 American troops stationed in South Korea.

The official also said that President Donald Trump and Pence have been in close collaboration with Defense Secretary Jim Mattis, and other top security officials with regard to military options not only for South Korea and the region, but with "particular emphasis on the belligerency of North Korea."

"We are not going to telegraph future potential moves one way or the other when it comes to military or national security issues. That's just not something in a public area that we're just going to engage in at any time," the official said when asked to elaborate on military options. 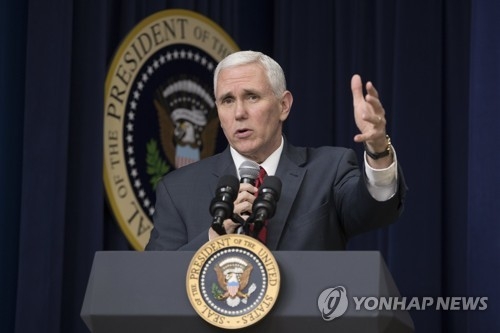 Pence is scheduled to arrive in Seoul on Sunday for a three-day trip. His arrival comes one day after one of the North's biggest national holidays, the birthday of late national founder Kim Il-sung, who is also grandfather of current leader Kim Jong-un.

Speculation has been ripe that the North could detonate a nuclear device to mark the anniversary.

"It's not a surprise that the anniversary is on Saturday. Traditionally, in the big parade -- rolls out his weapons and his mock weapons. So we're anticipating that. The intelligence community is obviously keeping the president and the vice president well informed on activities in the region, and the Defense Department and other partners have developed those options," the official said.

While in Seoul, Pence is scheduled to hold meetings with Acting President Hwang Kyo-ahn and National Assembly Speaker Chung Sye-kyun. He will also hold a listening session with local business leaders and give remarks to the business community.

"The overriding message that the vice president will be taking on a national security side to South Korea is that our long alliance between the U.S. and South Korea is the linchpin of peace and prosperity, that the President takes national security as a top priority, and that we have an ironclad commitment to all of our allies in the Asia Pacific that we take their defense very seriously, and that is unwavering," the official said.

Pence, however, won't be meeting with candidates in South Korea's presidential election.

"The election is coming up and we feel confident that the free and fair elections with the South Korean people -- whomever they choose as their President -- that we'll be able to work on behalf with the administration and continue to move our relationship forward," the official said.

Other topics of Pence's discussions in Seoul could include the deployment of the U.S. THAAD missile defense system and sanctions on North Korea, the official said.

"I would imagine it would come up probably on their end, but we're prepared to address that as well," the official said, referring to THAAD. "It's a critical point for the defense of South Korea in recognizing it's not an offensive weapon, it's there to prevent rockets slamming from the North Koreans."

The U.S. is also prepared to discuss sanctions against the North, the official said.

"Obviously, we've been working here collaboratively with the National Security Council, again, to look for a wide range of options for North Korea, one of which, to no surprise, would be sanctions. So if that is raised, we're prepared to discuss it," the official said.