WASHINGTON/SEJONG, April 14 (Yonhap) -- The United States designed none of its major trading partners as a currency manipulator Friday, but put six countries, including China, Japan and South Korea, on its "monitoring list" for closer watch on their currency practices.

"No major trading partner of the United States met the standards identified in Section 3004 of the Omnibus Trade and Competitiveness Act of 1988 for currency manipulation in the second half of 2016," the Treasury Department said in a report to Congress.

Treasury Secretary Steven Mnuchin pledged to continue to monitor currency practices closely, saying that an essential component of the Trump administration's strategy is to ensure that American workers and companies face a level playing field when competing internationally.

"When our trading partners engage in currency manipulation, they impose significant, and often long-lasting hardship on American workers and businesses. Expanding trade in a way that is freer and fairer for all Americans requires that other economies avoid unfair currency practices, and we will continue to monitor this carefully," Mnuchin said.

The U.S. report said Asia's fourth-largest economy posted US$28 billion in goods surplus with the U.S. last year, with its current account surplus accounting for 7 percent of the country's gross domestic product.

Also, Seoul's financial authorities intervened on the foreign exchange market throughout 2016 in order to ease a sharp depreciation of the local currency, selling $6.6 billion over the on-year period.

"Treasury estimates that during 2016 Korea was a net seller of foreign exchange of about $6.6 billion (0.5 percent of GDP). This is in notable contrast to several prior years of asymmetric intervention to resist won appreciation," it said. "Treasury urges Korea to enhance the flexibility of the exchange rate
and will be closely monitoring Korea's currency intervention practices." 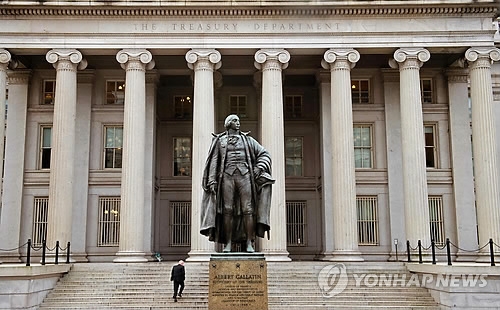