SEOUL, April 15 (Yonhap) -- Kim Hyun-soo of the Baltimore Orioles has hit his first double of the season following a four-game absence from the lineup.

Kim, who bats left-handed, had been benched in the four previous games, as the Orioles faced three left-handed starters and a right-handed knuckleballer in Boston Red Sox's Steven Wright.

The South Korean left fielder has yet to face a left-handed pitcher this season. In 2016, his first season in the bigs, Kim was 0-for-18 against southpaws.

In this year's spring training, Kim batted 3-for-8 against left-handers, but manager Buck Showalter continues to platoon him with right-handed batters like Craig Gentry and Trey Mancini. 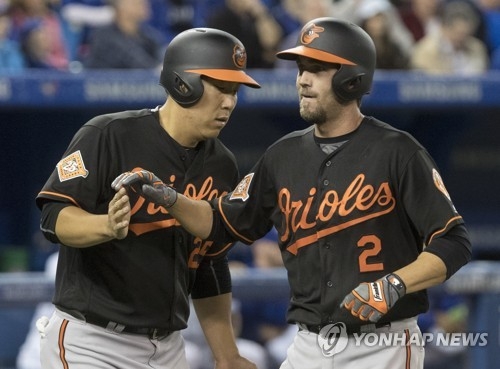 Mancini, who didn't play Friday, is batting .294 (5-for-17) with a pair of home runs and five RBIs. Gentry, who entered Friday's game for Kim in the eighth for the defensive purpose, is hitless in 12 at-bats this season.

Kim batted seventh on Friday against right-handed starter Aaron Sanchez. He grounded out his first time up in the second, and then lined a double to right in the fifth inning on a 2-2 curve.

Kim grounded out to first in the seventh and flied out to left in the eighth, before getting lifted for Gentry in the field in the bottom half of that inning.

The Orioles improved to 7-2, tops in the American League East, while the Jays have now lost seven in a row to fall to 1-9, the worst record in the majors.