Pyongyang fired off the missile from a land-based launch facility in Sinpo, South Hamgyong Province, at around 6:20 a.m., the JCS said, noting that it needed further analysis to determine the exact type of the missile and other details.

The botched missile launch came before U.S. Vice President Mike Pence arrives in Seoul in the afternoon to highlight the robust alliance against the wayward regime's escalating saber-rattling.

"The North attempted to launch a missile, but we presume that the launch ended in failure," a JCS official said, declining to be named.

On April 5, Pyongyang fired off what was thought to be a KN-15 medium-range ballistic missile from the Sinpo area. It flew just 60 kilometers before falling into the East Sea.

Some experts here say the failed launch might indicate the North has difficulty in developing solid-fuel engines for a new missile or the Scud-ER missile. Others say the launch could be part of its intercontinental ballistic missile (ICBM) development program.

During the session, Seoul decided to respond "strongly" to additional North Korean provocations, the presidential office here said in a press release.

Seoul's foreign ministry "strongly condemned" the launch, warning that Pyongyang would face "serious punitive measures" should it conduct a nuclear test or other major strategic provocations.

The latest launch came amid rising tensions with the United States that is sending an aircraft carrier strike group to waters off the Korean Peninsula to deter potential North Korean provocations, such as a nuclear test.

On Saturday, the North staged a massive military parade to mark the 105th birthday of its national founder Kim Il-sung, where it showed off three ICBMs to apparently send a message that it would not yield to U.S. military pressure.

The liberal Democratic Party called the launch a "reckless, incomprehensible provocation," stressing Pyongyang cannot defend its regime with its nuclear and missile programs.

The center-left People's Party berated the North for escalating tensions on the peninsula, saying a military provocation can never be justified for any reason and would only worsen its isolation and international denunciation.

The conservative Liberty Korea Party upbraided the North for its "rash" act and warned against driving the security situation into a crisis. The left Justice Party also joined the chorus of criticism, saying the North must not seek internal cohesion through any provocative means. 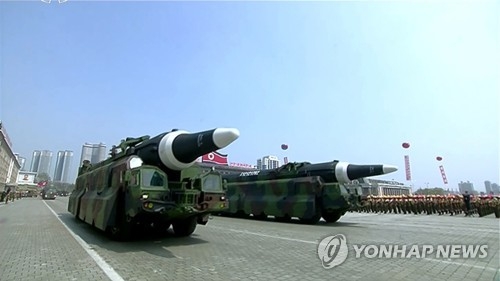