Overall sales in domestic duty-free stores declined to 1.06 trillion won (US$930 million) in March from the previous month's 1.305 trillion won, the Korea Customs Service said in a statement.

The decline was sparked by China's ban on all group travel to South Korea from March 15 onward amid a row between Seoul and Beijing over the ongoing process to deploy the Terminal High Altitude Area Defense (THAAD) system, it said.

China has explicitly opposed the installation of the THAAD system since July last year when Seoul and Washington agreed to install the system in South Korea by 2017 to better counter growing nuclear and missile threats from North Korea.

It has argued the powerful X-band radar that comes with the system could be used against it though the allies have reiterated the system is purely defensive. 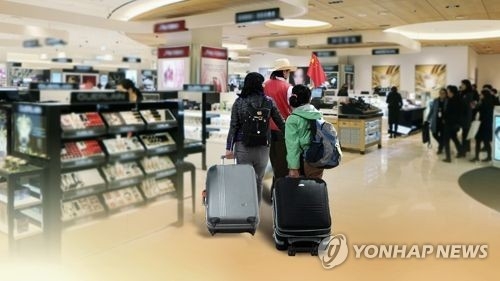 The customs office expected local duty-free shops to report worsening sales results in the coming months as China is likely to continue its economic sanctions against South Korea for the time being.

It will have an impact on the bottom lines of duty-free shops, particularly those in Seoul, as they used to earn 70 to 80 percent of their sales from Chinese travelers, the statement said.

To minimize the impact, duty-free shop operators have asked the government to temporarily raise the upper limit of purchases by South Korean travelers at the shops, increase tax benefits for customers and lower their rental payments for shops at Incheon International Airport, it said.

Shinsegae Group and Hyundai Department Store, originally scheduled to start operations by December this year, said they may consider delaying their opening dates.