Right after touching down at a U.S. air base in Pyeongtaek, 70 kilometers south of Seoul, Pence visited South Korea's national cemetery in Seoul, a symbolic gesture to highlight the alliance forged during the 1950-53 Korean War. 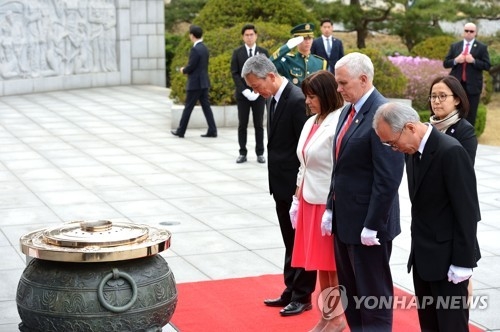 The visit to South Korea, his first Asian trip since his inauguration in January, came amid rising tensions here. Pyongyang has been seen preparing for another nuclear test while Washington has sent an aircraft carrier strike group to waters off the Korean Peninsula in a show of force against the wayward regime.

After his visit to the cemetery, Pence was to meet with U.S. troops in Seoul to celebrate Easter Day.

The U.S. has indicated it could take a more aggressive approach to the North, as it has recently flexed its military muscle in Syria and Afghanistan. On April 7, the U.S. struck a Syrian air base to punish the Bashar al-Assad regime for a suspected chemical attack. Less than a week later, it dropped a massive bomb on an Islamic State complex in Afghanistan.

During their talks, Hwang and Pence are also expected to discuss the ongoing installation of a U.S. missile defense system on the peninsula. They may reaffirm the deployment of the Terminal High Altitude Area Defense system and call on Beijing to stop its economic retaliation against South Korea, observers said.

After their meeting, the two will release a statement, which is expected to warn the North against provocations and highlight the unwavering alliance.

Pence's schedule here includes a visit to the Demilitarized Zone bisecting the peninsula and a speech at a meeting with the American Chamber of Commerce in Korea. 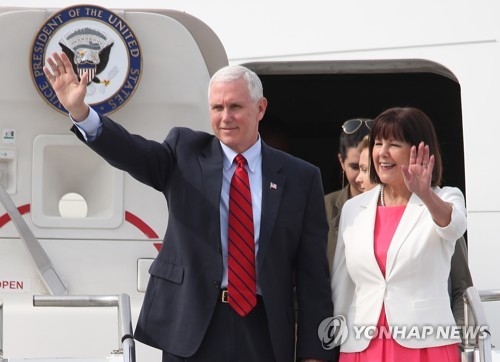