The Roding Sinmun, a daily of the Workers' Party, added four more pages for its 10-page special edition to report on the events held the previous day to celebrate Kim's 105th birthday, called the Day of the Sun, that ranged from a massive military parade and a mass rally to a collective youth ball, banquets and art performances.

In particular, the paper allotted the first seven pages, with some 70 photos, entirely to the parade boasting strategic weapons, including a new intercontinental ballistic missile (ICBM), and the mass rally at the Kim Il-sung Square in Pyongyang.

In addition, the second page paid homage to visits to the Kumsusan Memorial Hall, where Kim's body is enshrined.

Last year, the paper did not issue a special edition. 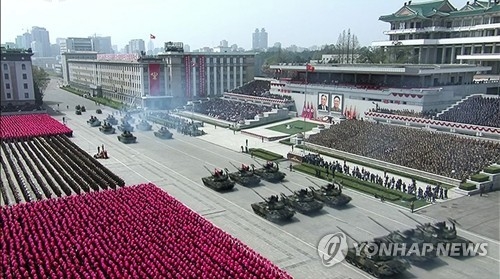