SEOUL, April 16 (Yonhap) -- South Koreans on Sunday marked the third anniversary of a deadly ferry disaster with various commemorative events that called for verifying the exact cause of the sinking and preventing the recurrence of such a tragedy.

The events to remember the nation's worst maritime disaster took place in Seoul, Incheon, Ansan and Jindo -- the island close to the scene where the Sewol sank -- with citizens sending their messages of solace to the families of the deceased.

The 6,825-ton ship sank off the southwestern coast near Jindo on April 16, 2014, leaving 304 passengers dead, with nine of them missing. Most of the victims were high-school students on a school field trip.

The salvaged rusty ship was put on land at a port in Mokpo, some 410 kilometers south of Seoul, just last Tuesday, with officials expected to launch a long-awaited search to find the remains of the missing victims as early as this week.

During his speech at an event to underline the importance of public safety, Acting President and Prime Minister Hwang Kyo-ahn vowed to make all-out efforts to recover the bodies of the missing victims.

"I pray for the souls of the victims, who passed away due to the tragic ferry accident three years ago and would like to extend my words of solace to the bereaved families," Hwang said at the event in Seoul. 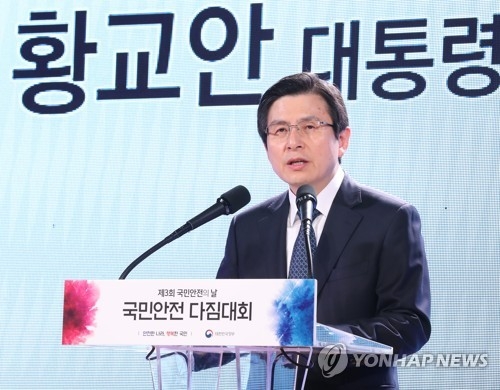 "The government has been prioritizing finding the remains of the missing, and we will also carry out a search of the ship swiftly and thoroughly," he added.

A large memorial event was held in Paengmok Port on Jindo, which has been a pilgrimage site for those commemorating the victims' deaths. Some 1,000 citizens from across the country participated in the gathering to pray for the victims.

Among the participants was Heo Hong-hwan, the father of Heo Da-yun, one of the nine missing victims.

"Please, give us your attention and encouragement so that the nine victims can return to their families," Heo said. "The ferry (disaster) has yet to end. ... We want all of you to be with us."

Presidential candidates and political parties also voiced hopes that the scars on the victims' families can be healed soon with efforts to verify the truth behind the disaster and bring to justice those responsible for it.

The joint investigation team of prosecutors and police concluded in October 2014 that the sinking was caused by a combination of cargo overloading, an illegal redesign of the ship and the steersman's poor helmsmanship.

But wild and persistent rumors have kept surfacing, further frustrating the victims' families and complicating efforts by the country to recover from the fallout of the tragedy.

"The past three years (since the disaster) was a period when pain has deepened rather than being healed," Moon Jae-in, the presidential front-runner from the liberal Democratic Party, said during his speech at a memorial event in Ansan, 42 kilometers southwest of Seoul. 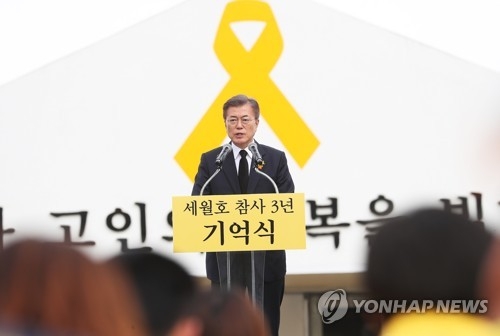 Moon, in particular, vowed to open another special panel to look into the disaster if elected president, while berating the current government for failing to take due measures to properly honor the victims.

The minor People's Party called for the government to strive harder to find the missing victims, stressing the 2014 tragedy is "still ongoing."

"Through an exhaustive search and investigation into the salvaged ferry, we have to verify the truth, come up with measures to prevent the repeat of such a case and punish those responsible for it," Son Kum-ju, a spokesman for the party, said in a commentary.

The conservative Liberty Korea Party stressed that its presidential candidate, Hong Joon-pyo, will seek to strengthen public safety as a way to honor the victims' sacrifices. 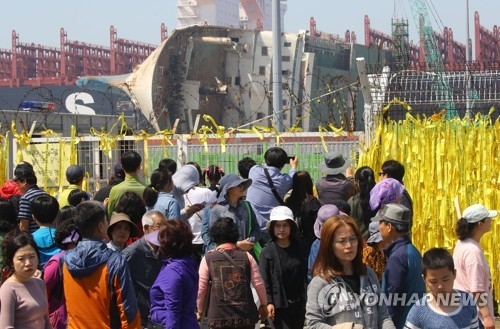