During a press conference, Hong, in particular, stressed his campaign focus on security, saying he would implement a "peace-through-armament" policy based on "power superiority" -- not parity -- over a provocative North Korea.

In line with the proposal, the prosecutor-turned-politician said he would push for the swift deployment of a Terminal High Altitude Area Defense (THAAD) system, a core element of the United States' multilayered global missile defense shield.

He also reiterated his plan to create a marine special warfare unit and ask Washington to redeploy tactical nuclear weapons to the peninsula, which were withdrawn after the two Koreas adopted a joint declaration on denuclearization in 1991. 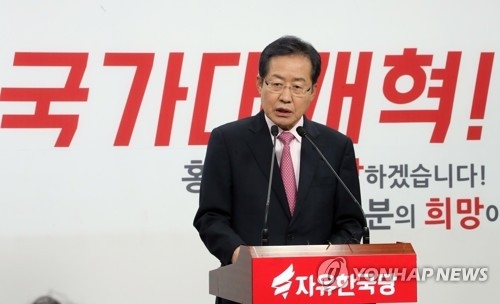 On the political front, Hong pledged to push for a constitutional revision to address the centralization of powers in a single national leader and relocate all government agencies -- except for presidential offices -- to the administrative capital of Sejong, 121 kilometers south of Seoul.

He also promised to reorganize the unicameral legislature into a bicameral one, reduce the number of lawmakers and remove their privileges, such as immunity from arrest. Moreover, he would streamline the presidential office and give more authority to the prime minister.

On the economic front, Hong vowed to reinvigorate the manufacturing sector and other struggling businesses by swiftly curtailing unnecessary regulations and extending tax benefits, especially to those that bring their overseas factories back to Korea.

Hong also said he would push for massive infrastructure projects to improve roads, bridges and tunnels so as to enhance public safety, create jobs and revitalize the provincial economy.

Touching on the public welfare issue, Hong stressed that his welfare program will focus on enhancing the well-being of regular citizens, not the well-heeled.