(ATTN: UPDATES throughout with final result)

SEOUL, April 17 (Yonhap) -- Choo Shin-soo of the Texas Rangers has gone deep for the first time in the new season.

Choo hit a three-run home run off Hisashi Iwakuma of the Seattle Mariners in the top of the second inning at Safeco Field in Seattle on Sunday (local time), erasing the Rangers' 1-0 deficit.

Batting seventh as the designated hitter, Choo added a two-run double in the three-run third inning for a five-RBI day and drew a walk in the eighth inning before getting lifted for pinch runner Delino DeShields.

Despite Choo's heroics at the plate, the Rangers lost 8-7 on a walk-off infield single by Nelson Cruz in the bottom of the ninth. Closer Sam Dyson gave up two runs in the ninth to blow his third save of the year in as many opportunities.

The Rangers opened up a 6-1 lead after the third, but the Mariners cut the deficit to 6-4 on a three-run shot by Mitch Haniger in the bottom of that inning. And they then made it a one-run game in the bottom sixth when Danny Valencia lined a double to center.

The Mariners completed their comeback in the bottom seventh as a solo home run by Guillermo Heredia made it 6-6.

The Rangers wasted a bases-loaded opportunity in the top eighth, but Nomar Mazara put them ahead 7-6 with a solo blast in the top ninth.

Dyson frittered away the lead in a hurry. Two singles and an intentional walk loaded the bases with nobody out, and Dyson walked Mitch Haniger to let in the tying run.

Two batters later, Cruz ended the game with a sharp grounder to shortstop Elvis Andrus, who made a diving grab to keep the ball in the infield but couldn't start a double play.

Choo entered the game batting .229 (8-for-35) with two RBIs and no extra-base hits in nine games this season.

The 34-year-old veteran has had four 20-homer seasons, most recently in 2015. He was limited to just 48 games last year while hampered by injuries, which forced him to take four trips to the disabled list.

Usually an outfielder, Choo has mostly served as the Rangers' DH so far in 2017. 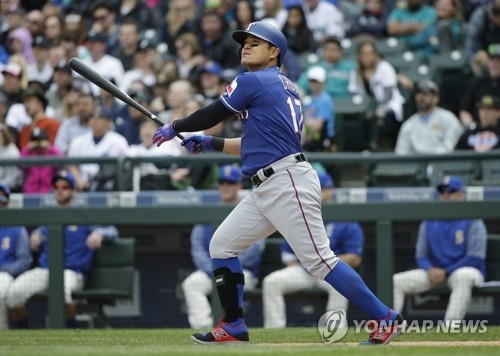