The 22-day campaign period will end one day before the May 9 election, according to the National Election Commission.

They include front-runner Moon Jae-in of the liberal Democratic Party, also the single largest party in the country's unicameral parliament.

Others include Ahn Cheol-soo of the center-left People's Party, Hong Joon-pyo of the former ruling Liberty Korea Party, Rep. Yoo Seong-min of the conservative Bareun Party and Rep. Sim Sang-jeung of the progressive Justice Party.

One candidate is running independent while the other nine are candidates of political parties that currently hold no parliamentary seats. 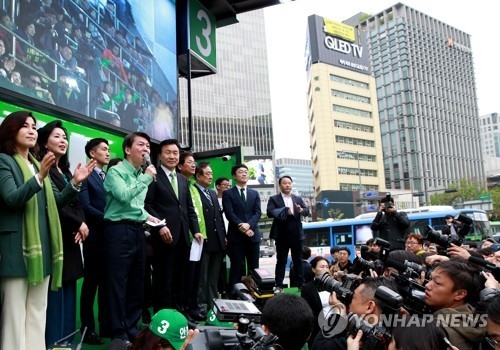 The election, however, is increasingly seen as a two-way race between two front-runners -- Moon and Ahn -- who together have garnered more than 80 percent of all votes in most recent polls.

With the start of the official electioneering period, each candidate may place up to 3,400 street banners and 93,000 posters throughout the nation, promoting their runs for the presidency, and mail up to 23 million handouts to households, the election watchdog said.

They may also purchase up to 30 one-minute TV commercial spots, along with up to 70 newspaper advertisement sections each. 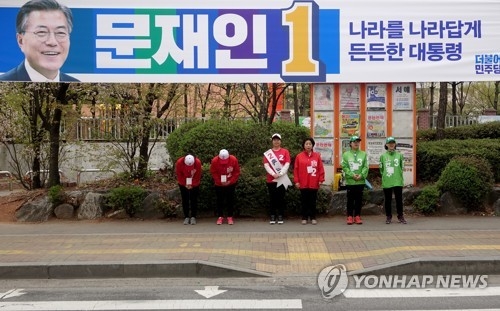 All such activities may cost tens of billions of won and must be paid for by the candidates or their political parties, if they have one.

The NEC has said each candidate may spend up to 50.9 billion won (US$44.57 million) during their official campaign.

The election watchdog will fully refund the money, as long as they are proven legitimate and if the candidate wins more than 15 percent of all eligible votes cast in the upcoming election.

(LEAD) Official campaign for presidential vote kicks off with 15 contenders

(LEAD) Official campaign for presidential vote kicks off with 15 contenders