SEOUL, April 17 (Yonhap) -- Prosecutors will indict ousted President Park Geun-hye on Monday on bribery and other charges related to 13 criminal allegations, and conclude their probe into the influence-peddling scandal that brought her down, prosecution sources said.

Prosecutors have sought to wrap up their monthslong investigation and Park's indictment before this week's launch of the official campaign for the May 9 presidential election. The official campaign period kicked off earlier in the day, with 15 hopefuls vying for the top elected office.

The former president went through five rounds of questioning at a detention center, south of Seoul, after she was arrested on March 31 on charges of bribery, abuse of power, coercion and leaking government secrets. 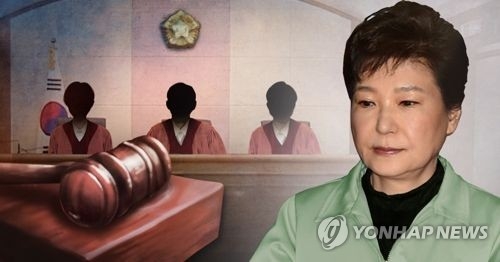 Park is accused of colluding with her friend Choi Soon-sil in coercing large conglomerates into donating to nonprofit foundations controlled by Choi and receiving tens of billions of won in bribes from Samsung.

Park reportedly denied all the charges during her in-prison questioning.

Woo Byung-woo, senior presidential secretary for civil affairs from 2015 to 2016, is expected to be put on trial, along with Park, for his alleged involvement in the scandal, the sources said.

He is accused of aiding and abetting Choi in meddling in state affairs and amassing profits using her ties to Park, though a local court refused to issue a warrant to arrest him last week.

Eyes are also on whether chiefs of South Korea's conglomerates Lotte and SK will stand trial on charges of bribery.

Prosecutors have been expanding their probe into the business groups after indicting Lee Jae-yong, Samsung Group's de facto leader, on charges of giving kickbacks to Choi in return for business favors.

Choi and Lee, as well as the other business tycoons, are flatly denying the allegations.