There are more smokers among low income earners while those that make more money are less likely to smoke, the Seoul National University Hospital survey said.

The survey of 1.59 million people in the country conducted between 2008 and 2014 by professor Kang Young-ho showed such a trend existing among male smokers in 96.3 percent or 236 cities and counties examined out of the 245 places checked.

The comparable figure was 97.5 percent or 239 cities and counties for female smokers.

By region, the smoking rate among males in the upper 20 percent income bracket was the lowest at 26.4 percent in Bundang-gu, Seongnam City, Gyeonggi Province, while the comparable number was the highest at 59.8 percent in Taebaek City, Gangwon Province.

The average smoking rate for males aged over 19 was 39.3 percent in 2015, according to statistics by the Ministry of Health and Welfare.

Jangseong County, South Jeolla Province, had the lowest smoking rate of 0.2 percent for women who were in the upper 20 percent income earning range and Dongducheon City, Gyeonggi Province, had the highest rate at 13 percent. 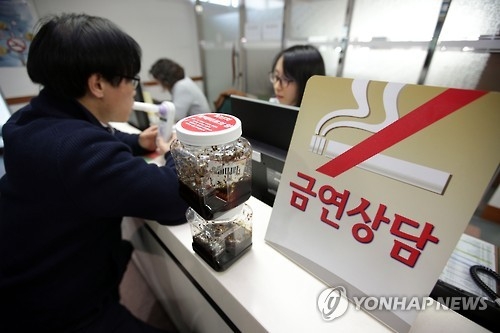