SEOUL, April 17 (Yonhap) -- Around 1,000 U.S. airmen and fighter jets have teamed up with South Korea's Air Force in a joint combat training to ensure their readiness against North Korea's provocations, the Pacific Command (PACOM) announced Monday.

The two-week Max Thunder exercise, one of the largest military flying exercises held annually in South Korea, is scheduled to run though April 28 at Kunsan Air Base in the southwest of the peninsula.

It involves various types of American aircraft, including F-16s from the 7th Air Force, AV-8Bs from the 12th Marine Aircraft Group and EA-18Gs from the Electronic Attack Squadron 132, all of which are based in South Korea and Japan, according to PACOM.

South Korea has dispatched roughly 500 personnel in support of the F-15K, F-16, F-5E and F-4E fighters, as well as other Air Force planes in operation. 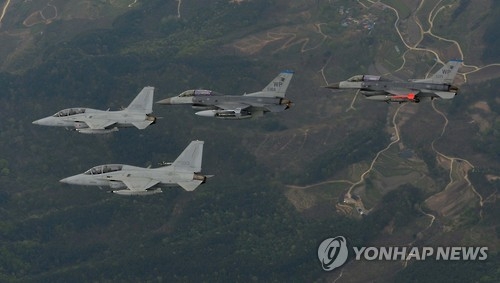 "This exercise will rigorously test our aerial combat capability and highlights the ironclad commitment between the U.S. and (South Korea), and the multifaceted capabilities we possess in this theater," said Lt. Gen. Thomas W. Bergeson, 7th Air Force commander.

Tensions have escalated on the peninsula, with North Korea ratcheting up war threats and the U.S. toughening its stance.

The North test-fired a missile from its east coast Sunday, a day after a massive military parade in Pyongyang, but it apparently failed, South Korean and U.S. defense officials said.

The allies plan to hold another annual joint Air Force training, code-named "Vigilant Ace," in the latter half of this year.