The Presidential Archives under the National Archives of Korea (NAK) said the presidential office Cheong Wa Dae and other agencies that created the records during the Park administration began the transfer.

The state archives earlier said it plans to complete the work by the May 9 presidential election.

Critics here have voiced concerns over the possibility of some presidential records being destroyed in the process.

Prosecutors, which were set to wrap up their investigation into the scandal the same day, could not get access to some of the records as the presidential office repeatedly turned down their request for a search to gather evidence.

The former president was arrested late last month on a string of allegations, including bribery, coercion, abuse of power and leaking government secrets.

The archives agency said it began the transfer of records that are not subject to controversy. Records created at the offices of Park's former aides and the security team have yet to be moved.

A number of Park's former secretaries were arrested and indicted over their alleged involvement in the influence-peddling scandal.

By law, the president can restrict access to designated records for a period of 15 years, or up to 30 years if they are related to privacy issues.

The authority will be given to Acting President and Prime Minister Hwang Kyo-ahn, who took over on Dec. 9 after Park was impeached by the parliament.

Some civic groups and politicians have demanded Hwang not exercise the right, as key records related to controversial issues, such as the Sewol ferry disaster and the 2015 comfort women deal with Japan, can be sealed.

An archives official said they will be able to know which records will be designated for protection when the transfer operation nears its end. 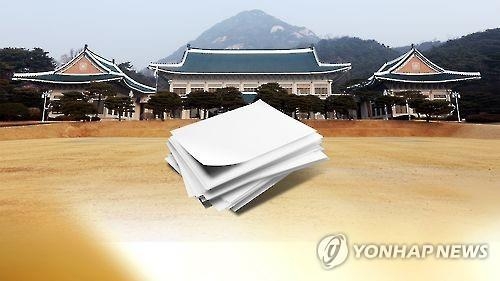