SEOUL, April 17 (Yonhap) -- The ministers of the interior and justice on Monday vowed to ensure a fair and clean presidential vote, warning of "zero tolerance" against election crimes such as smear campaigns, bribery and violence.

In a joint statement, Interior Minister Hong Yun-sik and Acting Justice Minister Lee Chang-jae stressed the government will mobilize all of the capabilities of the prosecution and police to prevent any illegal electioneering and other violations in the lead-up to the May 9 vote.

"It is a very crucial election as we have to pick our national leader in an unprecedented short period of time with the presidential post left vacant (due to the ouster of former President Park Geun-hye over a corruption scandal)," they said in the statement.

"The government, with our extraordinary determination, will strive to firmly establish a fair election culture," they added.

They also warned public servants against engaging in any election-related activities in breach of their obligations to remain politically neutral.

"(We also) urge (citizens) to watch out for any illegal election campaigns based on your mature civic consciousness," they said.

The country's rare presidential by-election was triggered by the March 10 dismissal of Park over a string of her corruption allegations, including bribery, abuse of power and leaking official secrets.

A total of 15 contenders have registered their candidacy with the state election management office. The election race is increasingly seen as a two-way race between front-runner Moon Jae-in of the liberal Democratic Party and runner-up Ahn Cheol-soo of the center-left People's Party with their combined support ratings reaching nearly 80 percent. 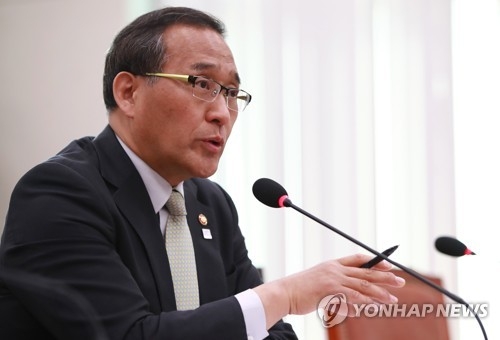