SEOUL, April 17 (Yonhap) -- North Korea has formed special operation forces for the first time in an apparent show of military strength, an analysis on North Korea's media reports showed Monday, amid tensions over its nuclear and missile program.

The country unveiled the existence of the Korean People's Army (KPA) special forces for the first time at a military parade Saturday to mark the 105th birthday of late founder Kim Il-sung, according to an analysis on the reports by Yonhap News Agency.

North Korea's state-run TV station mentioned the name of the special operation forces after the navy, the air force and the strategic forces at the parade.

Military officers belonging to the special forces marched in formation while wearing black camouflage cream on their faces and black sunglasses, according to footage by the country's state TV station.

They were carrying a new type of rifle installed with grenade launchers, while wearing helmets with night-vision goggles, it showed.

"Once Supreme Commander Kim Jong-un issues an order, they will charge with resolve to thrust a sword through the enemy's heart like lighting over Mt. Paektu," said an announcer of the TV broadcaster, referring to the highest peak on the Korean Peninsula.

The North's leader watched the parade at a large plaza in Pyongyang, returning a salute from goose-stepping soldiers marching across it.

The parade came amid speculation that Pyongyang may conduct its sixth nuclear test or launch an intercontinental ballistic missile around its key anniversaries in April.

North Korea's creation of the new forces is seen as aiming at countering South Korea and U.S. special forces' "beheading" operation to take out the North's leadership, analysts said.

North Korean Col. Gen. Kim Yong-bok, a former military leader of the KPA Unit 11, is presumed to be leading the special forces as a new commander, given that his name was mentioned by the country's media at the parade.

It is not the first time that Pyongyang has formed new military forces on the occasion of a military parade.

North Korea unveiled the existence of its strategic rocket forces for the first time at a military parade in 2012 to mark the centennial of Kim Il-sung's birth. In 2013, the country set up the strategic forces by expanding the rocket forces. 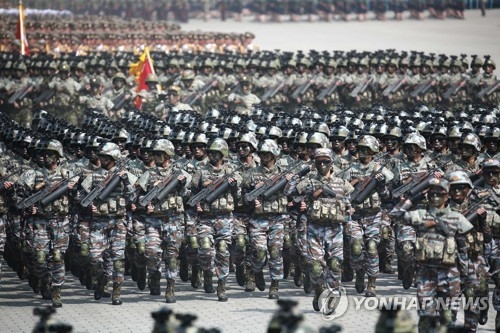