SEOUL, April 17 (Yonhap) -- South Korea's defense ministry affirmed Monday that there is no change in its plan to deploy an advanced U.S. missile defense system here as early as possible.

It was responding to speculation that South Korea and the U.S. may adjust the pace of bringing a Terminal High Altitude Area Defense (THAAD) battery to the peninsula for political reasons, with South Koreans set to pick their new president on May 9. 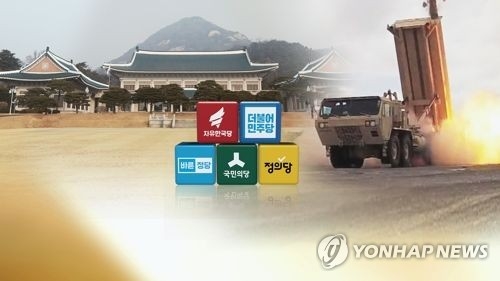 A White House foreign policy advisor traveling with Vice President Mike Pence was quoted as telling reporters that the issue of completing the THAAD installation is up to South Korea's next president.

"There is no change in the basic position of South Korea and the U.S. to proceed, as planned, with the preparations for the early operation of the THAAD system against North Korea's advancing nuclear and missile threats," Moon Sang-gyun, a spokesman for the Ministry of National Defense, said at a press briefing.

The allies are in the "final stage of consultations" over the provision of land before full-scale construction work, he added.

South Korea has selected a golf course in Seongju, North Gyeongsang Province, as the site for the THAAD system.

Moon indicated that its deployment won't be finished until South Korea's presidential polls.

There have been political debates over whether South Korea should let the U.S. Forces Korea position the missile defense system on its soil, which would severely damage its relations with China.