SEOUL, April 17 (Yonhap) -- South Korean football club Suwon Samsung Bluewings have lost only once since the new season started last month, but some angry supporters are already calling for the head coach's resignation.

Suwon, the 2016 Korea Football Association (FA) Cup winners, are currently 10th in the top-flight K League Classic with five draws and one loss. After their match against Gwangju FC on Sunday ended in a scoreless draw at home, some avid Suwon fans booed their players and lambasted head coach Seo Jung-won for the uninspiring performance.

Along with bottom dwellers Incheon United, Suwon, the four-time K League champions, are two of the 12 teams that have yet to collect a win in the league.

Suwon are not winless at the Asian Football Confederation (AFC) Champions League, however. They are currently the leaders in Group G with two wins and two draws. However, both of Suwon's wins have come against Eastern SC of Hong Kong, the AFC Champions League (ACL) debutantes that are considered the weakest competitors in the group.

Including the ACL, Suwon have seven draws in 10 matches. 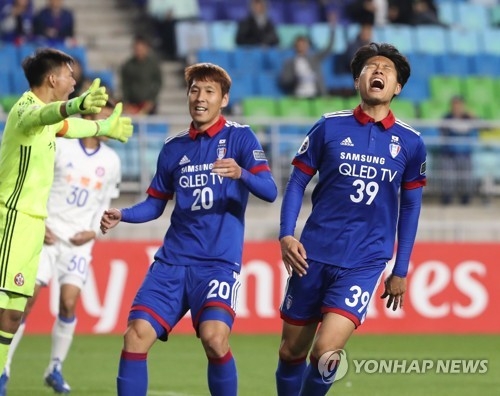 For Seo, this season could be his most difficult one since he took the helm in 2013. After taking fifth in his debut season, the 47-year-old led Suwon to runners-up finishes in 2014 and 2015.

But things started to fall out last year as Suwon finished seventh in the league and missed the upper group, or Group A, for the first time since the league adopted the split system in 2012. While angry fans also demanded an explanation for the poor performance then, Seo got the last laugh by winning the FA Cup against their archrivals and K League Classic champions FC Seoul.

Suwon's draw-plagued performance started in 2016. Last year, they had 18 draws in the K League, the most since the league started to play 38 matches a season in 2013.

It was also the third-most draws marked by a club in a single K League season after Seongnam FC and Jeonnam Dragons. Seongnam had 21 draws in 40 matches in 1989, while Jeonnam had 20 draws in 44 matches in 2003.

Suwon last year were criticized for their inability to hold onto the lead, allowing equalizers at the end. In the 2016 K League Classic, 18 of 59 goals conceded by Suwon came after the 80th minute of the match. Now, some fans have dubbed the last 10 minutes of the match "Seo Time," mocking Suwon's lack of persistence to seal the victory.

This season, Suwon have allowed only one goal in "Seo Time" so far, but their attack still appears to be a problem. Last year, Suwon had eight goals in the first six matches, while managing one win, four draws and one loss.

In the 2017 K League, Suwon have so far scored only five goals, tied for second worst in the league with FC Seoul. Suwon's Brazilian striker Johnathan, who fired 10 goals in 14 matches last year, is the team's leading scorer with two.

Suwon bagged five goals against Eastern at the ACL on Wednesday last week, but in the domestic league they have been silent in their last two matches. 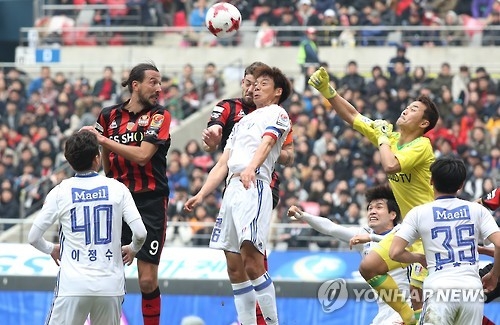 What also concerns Suwon is that a tough league schedule awaits them. Seo's team will meet No. 5 Gangwon FC on the road Saturday. Gangwon, the newly promoted club that made a splash with lavish signings this winter, have yet to lose at home.

Suwon will then face No. 3 Jeju United also away from home on April 30 after playing their ACL match against Kawasaki Frontale. On May 3, Suwon will finally have a match at home, but their opponents are the Pohang Steelers, currently the No. 2 team with a league-best 12 goals.