SEOUL, April 17 (Yonhap) -- Presidential front-runner Moon Jae-in on Monday vowed to spend 10 trillion won (US$8.8 billion) in the first year of his presidency alone to create new jobs in the public sector and encourage the private sector to follow.

The presidential candidate of the liberal Democratic Party said the money will be spent in just about seven months left in the year following his election.

The five-year term of the new president will begin the day after the May 9 presidential election.

"I will focus all my efforts and energy on solving the problem of (the shortage of) jobs that has become a source of social insecurity," Moon said while meeting with workers and supporters at an auto parts manufacturing firm in Daegu, 300 kilometers south of Seoul.

To this end, Moon said he will work to devise a 10-trillion-won supplementary budget if elected, and begin creating jobs in the public sector. 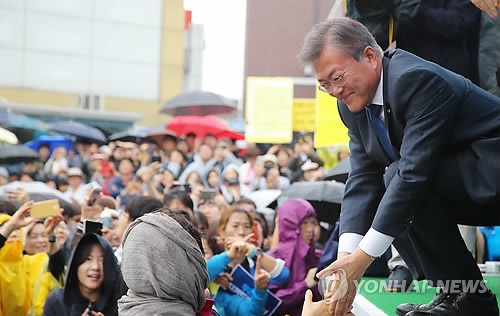 Moon's election pledges, released earlier, include creating 810,000 jobs in the public sector during his five-year presidency, which he said will help fetch 500,000 new jobs in the private sector each year.

"If I am elected president, I will immediately get to implementing those plans," he said.

The liberal presidential candidate also vowed efforts to improve overall working conditions, which will include a double-digit increase in the minimum wage next year.

Support for small companies will include a full government sponsorship of every third new worker hired by an SME for up to three years, he said.

"Jobs are growth and jobs are welfare. I will become a president who changes people's lives with jobs," he told the meeting, according to his party.