SEOUL, April 17 (Yonhap) -- KCON, a global Korean pop music and culture convention, will be held in Japan next month, showcasing 60 fast-rising K-pop idol artists, according to its organizer Monday.

The three-day event at the Makuhari Messe convention center in Chiba, east of Tokyo, from May 19 will feature Apink, CNBLUE, Cosmic Girl, GFriend, Lovelyz, Seventeen and more of the hottest K-pop names, the organizer of the annual event said.

KCON is also slated for other regions throughout the year, with two American events coming up at the Prudential Center in Newark, New Jersey, on June 23-24 and at the LA Convention Center in Los Angeles on Aug. 18-20. KCON is also scheduled to hold its first-ever event in Australia in September.

Having started in Irvine, California, in 2012, KCON has become sort of an annual pilgrimage for K-pop fans around the globe, attracting more than 350,000 attendees throughout its past five-year run. 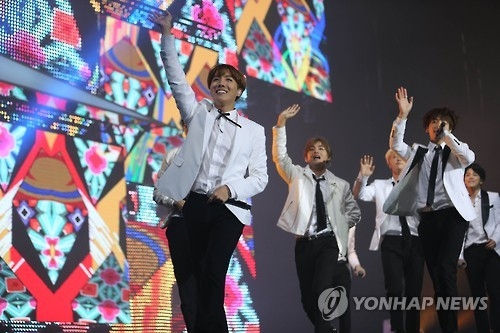