SEOUL, April 17 (Yonhap) -- The presidential nominee of the minor progressive Justice Party is a labor activist-turned-politician known for her lifelong advocacy for workers' rights and harsh criticism of family-owned conglomerates.

Sim Sang-jeung, 58, began her activism as a student at Seoul National University, the nation's top institution, in the early 1980s. While taking part in pro-democracy movements, she also led the formation of the university's first female student council.

Before graduating from the college of education, Sim entered a factory in an industrial zone in southwestern Seoul as a professional seamstress. 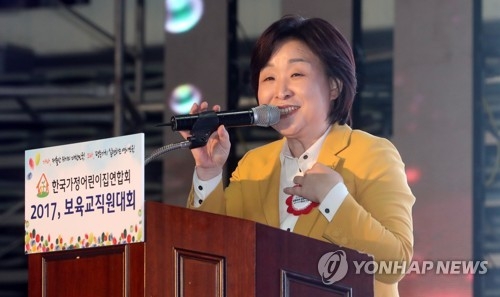 She played leadership roles at a national labor group and a metal workers' union. After leading a collective strike by unions in the industrial zone in 1985, Sim was put on the wanted list and sentenced to a suspended one-year prison term in 1993. While working as secretary-general of the Korean Metal Workers' Union, she earned the nickname "Iron Lady."

Sim entered the National Assembly in 2004 on the proportional representation ticket of the then Democratic Labor Party. Her scathing criticism of alleged irregularities committed by Samsung and U.S. private equity firm Lone Star's controversial acquisition of a South Korean bank catapulted her status to a star politician of the progressive camp.

In 2007, the lawmaker competed in her party's primary for the presidential election, but lost in a run-off. After the election, Sim sought to rebuild the party as leader of its emergency committee. When her proposals for reform were rejected, she bolted from the party and launched a new party the following year.

As talks for a grand progressive alliance gained momentum, Sim again left the new party in 2011 and founded the Unified Progressive Party with the Democratic Labor Party and the Participation Party.

While serving as co-chair of the UPP, she won re-election in the April 2012 parliamentary elections to represent a district in Goyang, north of Seoul. Shortly afterward, she resigned from her post to take responsibility for a corruption scandal surrounding her party's primaries.

She left the party completely when it voted to keep the two lawmakers accused of involvement in the scandal.

Although the scandal was the immediate reason for her defection, it was also seen as a departure from the alleged pro-North Korea forces within her party.

After helping launch the Progressive Justice Party, Sim ran for president again in 2012 but quit midway. The party was later renamed the Justice Party.

She served as the party's floor leader and won her third legislative term in Goyang in the 2016 parliamentary elections.

Sim is currently the party's co-chair. She is married with one son.