"The two countries promised to implement the December 2015 agreement that was highly esteemed in the international community regardless of the internal affairs (in South Korea)," Japan's Chief Cabinet Secretary Yoshihide Suga, the top government spokesman, told a press conference.

Tokyo claimed that a statue commemorating the victims before its consulate in the southern South Korean port city of Busan, along with another one standing in front of its embassy in Seoul, runs counter to the Seoul-Tokyo deal.

Suga's remarks reflect Japan's concerns that some major presidential candidates including Moon Jae-in, the leading presidential hopeful from the largest Democratic Party, have hinted at renegotiating the deal, with polls showing some 70 percent of South Koreans wanting the government to renegotiate the Seoul-Tokyo accord.

South Korea is set to hold a presidential election on May 9 following the impeachment of former President Park Geun-hye.

Critics in Seoul demand the cancellation of the accord, saying that the Japanese government still refuses to recognize its legal responsibility and denies the women were forcefully recruited to front-line military brothels. The deal was reached also without consultation with the victims, they said. 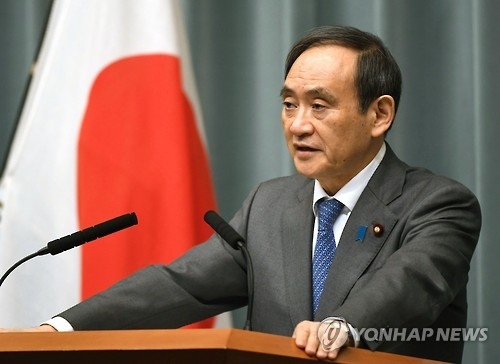 Japan calls on next S. Korean gov't to implement deal on 'comfort women'

Japan calls on next S. Korean gov't to implement deal on 'comfort women'