Park has been charged with bribery, abuse of power, coercion and leaking government secrets in the affair which also involved her long-time friend Choi Soon-sil and former key aides.

When she was arrested on March 31, she faced with coercion and abuse of power charges for her alleged collusion with Choi in forcing local conglomerates to donate a total of 77.4 billion won (US$68 million) to two nonprofit foundations -- Mir and K-Sports -- controlled by Choi.

The former leader was also charged with bribery by pressuring on Samsung to make huge donation to some organizations related to Choi. Samsung Group's de facto leader Lee Jae-yong was arrested for bribing Choi and in effect Park in return for helping him secure group control through a merger of two key units.

In its indictment of Park on Monday, the prosecution added new charges of soliciting bribes from Lotte and SK groups.

Lotte Chairman Shin Dong-bin was put on trial for charges of giving 7 billion won to the K-Sports Foundation.

SK Group avoided prosecution as it did not give 8.9 billion won in donations sought by the former president.

Prosecutors suspect that Park promised favors in relation to the two conglomerates' bids for duty-free shops and other business projects. The retail giant Lotte was selected by the Korea Customs Service (KCS) to operate the lucrative shop in Seoul, together with Hyundai and Shinsegae, in December.

The former president reportedly denied all the charges during her five rounds of questioning in jail.

Woo Byung-woo, senior presidential secretary for civil affairs from 2015 to 2016, was also indicted without detention for allegedly neglecting his duty in preventing Choi from meddling in state affairs and abusing his authority.

Park is also accused of creating a blacklist of cultural figures deemed critical of the government to deny them state support, and abusing her power to force local firms to sign business contracts with Choi's companies.

The massive corruption scandal gained the full spotlight in October after a local media outlet revealed a tablet PC allegedly used by Choi. The device contained a series of documents related to state affairs, some of which the prosecution concluded were government secrets. 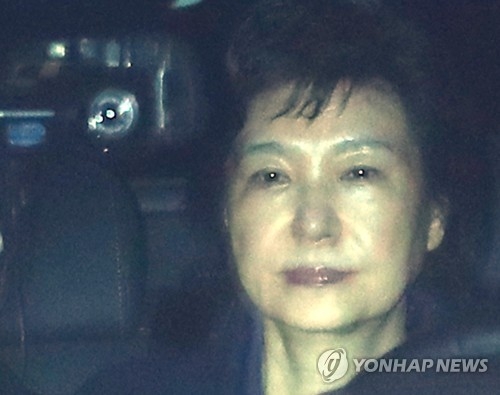