SEOUL, April 19 (Yonhap) -- With the FIFA U-20 World Cup just 30 days away, the local organizers and the South Korean national football team are in the final stretch of their preparations to deliver an impressive performance at home.

Under the slogan "Trigger the Fever," the U-20 World Cup will be played from May 20 to June 11 in six cities -- Cheonan, Daejeon, Incheon, Jeonju, Suwon and Seogwipo, Jeju Island. South Korea is the third country, along with Mexico and Japan, to have hosted all major FIFA men's tournaments, with the 2001 Confederations Cup, the 2002 World Cup and the 2007 U-17 World Cup. 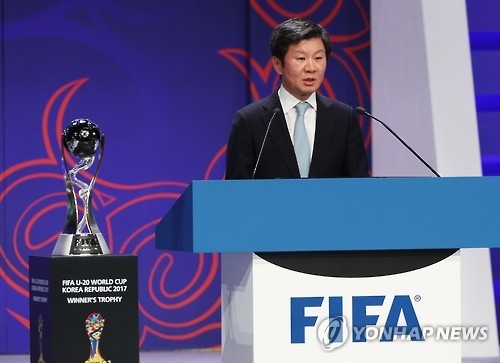 Twenty-four participants were divided into six groups of four teams at a draw on March 15. The top two teams from each group, along with four best third-place finishers, will enter the knockout stage.

South Korea have been paired with six-time champions Argentina, European giants England, and African side Guinea in Group A. Group B features Germany, Mexico, Venezuela and Vanuatu.

Portugal, two-time tournament winners, have been placed in Group C, along with Costa Rica, Zambia and Iran. Uruguay, who won the South American qualification, joined Japan, Italy and South Africa for Group D.

Group E consists of the 2013 U-20 World Cup champions France, New Zealand, Honduras and Vietnam. The United States, who topped the qualification round in its region, are in Group F and will face Senegal, Saudi Arabia and Ecuador. 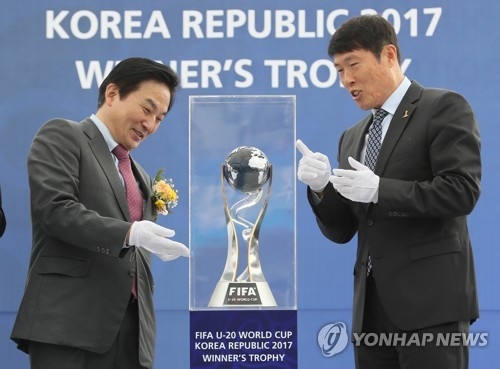 The organizers said refurbishment work at existing facilities has been completed and there are just a few things left to be done.

"Now, we're focusing on maintaining the best pitch condition at the venues," said Kwak Young-jin, vice chairman of the local organizing committee. "Everything is all set. We just need more fan participation."

Kwak added that ticket sales for the South Korean national team matches have been successful, but the organizers are hoping people will also buy tickets for matches between other countries. About 1.2 billion won (US$1.05 million) worth of tickets were sold as of last month, which is nearly half of their target, but the organizers believe the numbers will spike after South Korea's presidential election.

"Recent performances of our national team raised interest in the U-20 World Cup and ticket sales have been going well," he said. "Since there is the presidential election on May 9, it looks like everyone is busy, but I believe we can reach our goal for ticket sales."

The organizers have been working hard to promote the competition. Earlier this month, they invited embassy officials from 23 participating countries to talk about their preparations. Also to gather more fans, the U-20 World Cup winner's trophy tour has been going on since last week.

"We've had football clinics for youth, so that many young students can visit stadiums to see the matches with their family," he said. "Various events are ongoing and we believe these efforts will make more fans come to the stadium." 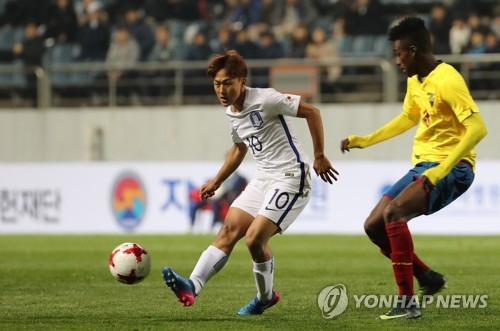 Performance-wise, South Korea are looking to repeat their success from 1983, when they reached the semifinals in Mexico.

The young Taeguk Warriors had a bumpy road last year as South Korea got eliminated in the group stage of the Asian Football Confederation U-19 Championship, forcing the departure of head coach An Ik-soo.

Just six months away from the tournament, South Korea appointed Shin Tae-yong, who led the national team at the Rio de Janeiro Olympics, to be their skipper for the U-20 side.

Shin has checked on more than 30 players since then, testing young footballers through training sessions in Portugal and at the four-nation invitational tournament, where they claimed the title over Honduras, Ecuador and Zambia.

Shin has called up 25 players, including FC Barcelona prospects Paik Seung-ho and Lee Seung-woo, for April training, but he will have to cut at least four players from the squad later this month. The deadline for the final 21-member entry is May 8.

South Korea will fine-tune their preparations before entering the World Cup. Shin's side will meet with Uruguay on May 11 and face Senegal three days later. 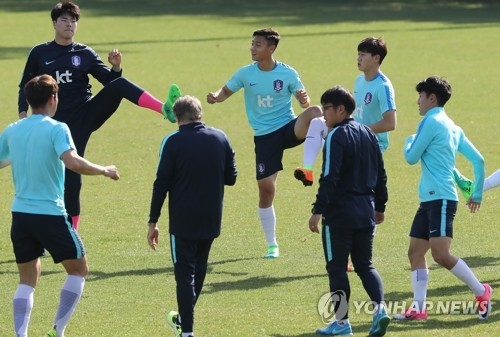