SEOUL, April 17 (Yonhap) -- Presidential candidate Ahn Cheol-soo gave up his parliamentary seat Monday to follow through on his promise to give his all to win the upcoming election, an official said.

Ahn, a co-founder and former leader of the center-left People's Party, submitted his resignation form to the National Assembly earlier in the day as the official campaign for the May 9 election kicked off. 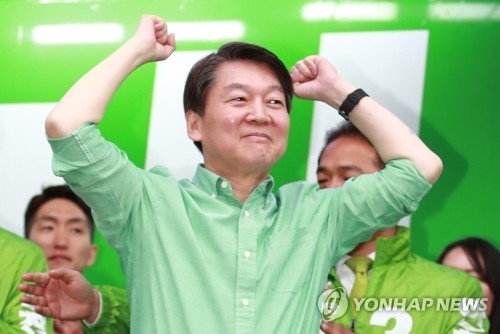 The maverick politician had repeatedly said he would resign to show he is a "responsible" presidential candidate.

"Ahn has put his all into creating a South Korea where the people win," Son Kum-ju, senior spokesman of the party's election campaign, said in a press briefing. "(We) will build the future with the people and enable the Republic of Korea to dream again."

The move is widely seen as an attempt to undermine his biggest rival Moon Jae-in of the liberal Democratic Party. The two candidates are currently neck and neck in opinion surveys that show their combined approval rating at some 80 percent.

Both candidates ran for the 2012 presidential election before Ahn dropped out to back Moon, who then lost to Park Geun-hye of the then ruling party. Moon, who held on to his parliamentary seat then, has made no mention of giving it up this time.

Ahn's resignation reduces the party's legislative seats to 39 in the 300-member National Assembly. The former software mogul had been serving his second consecutive term since winning a by-election in a district in Seoul in 2013.

Ahn gives up parliamentary seat ahead of presidential election

Ahn gives up parliamentary seat ahead of presidential election