"South Korean customers appear to be fed up with similar designs and lack of features in the existing subcompact vehicles. As we have judged, there is demand for a small but powerful and premium hatchback, we will place the Europe-made Clio in the Korean market in August," an official at Renault Samsung Motors Corp. told Yonhap News Agency.

Many South Koreans have long preferred midsize or full-size cars as they equate the size and price of a car with social status. But there have been few "right models" to attract customers in the subcompact or smaller vehicle segment.

The Clio hatchback will be shipped to the Korean market after being manufactured in Renault's factories in Europe, the corporate source said, asking not to be named.

He expected the Clio hatchback to carry a price tag of less than 30 million won (US$26,400) in the domestic market to woo customers. 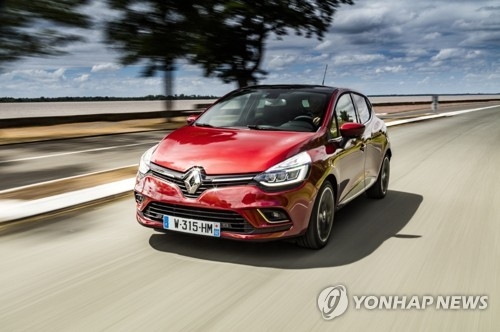 In an effort to further beef up its lineup, Renault Samsung "will also consider producing the ultra-compact Twizy electric car" in its plant in Busan, 453 kilometers south of Seoul, depending on demand, he said.

Renault Samsung, an 80 percent-owned unit of Renault, plans to introduce the Twizy electric car in the domestic market in the second half of this year.

Most of the models except for the QM3 SUV are produced in the 270,000-unit-a-year Busan plant. The QM3 SUV is imported from Renault's plant in Spain for local sales.

The French carmaker sold 9.9 million vehicles globally last year when it acquired a 35 percent stake in Mitsubishi Motors Corp. for 237.3 billion yen ($2.19 billion) in May. The overall sales figures include Mitsubishi car sales of 934,000 units.